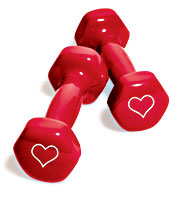 After surviving a heart attack, I couldn’t wait to start my 4-month cardiac rehabilitation program so I would just start feeling “normal” again. But when I showed up for my first assessment, I was disappointed by the cardiac nurse’s recommendation that, because of ongoing issues, I should wait two months until I felt much stronger before starting. A Canadian study from the University of Alberta now suggests, however, that earlier might just be better for many.

For best results in most clinically stable patients after a heart attack, these new findings suggest that early exercise as well as prolonged exercise may well be the key to the best post-heart attack outcomes.

We know that previous studies overwhelmingly show that heart patients who exercise regularly are over 30% less likely to experience further heart attack, stroke or death. The U of A team found that stable patients who have suffered heart attacks get more benefits for heart performance when starting an exercise program one week after the heart attack than if they had waited a month or longer to begin cardiac rehabilitation.  Co-author Dr. Mark Haykowsky of the U of A’s Faculty of Rehabilitation Medicine explained:

“While it’s been shown that exercise has a favourable effect on heart function, it’s also important to dispel the idea that what the heart needs is rest.”

One week after my own heart attack, I remember a stupefyingly slow one-block walk to the corner, leaning on the arm of my son, Ben, and feeling distressingly frail and weak. My hospital discharge instructions had been to walk one block a day for the first week, two blocks the second week, and so on.

But the U of A study suggests that, in fact, the heart will actually become better with exercise sooner and with continued exercise over a longer period of time. Dr. Haykowsky’s study, published in the online version of the medical journal Trials, was a meta-analysis of 12 published studies on 647 post-heart attack patients (mean age: 55 years).

“In the past, patients in Canada and the U.S. have been told to wait for one month or longer before beginning their exercise treatment, and this treatment typically only goes on for about three months.”

But patients who begin an exercise program one week after their heart attack were found to have the best heart performance.

For those who waited to begin their exercise rehabilitation program, the results seem dramatic:

“For every week that a patient delayed his or her exercise treatment, he/she would have to train for the equivalent of one month longer to get similar benefits.”

Exercise in this study is defined as aerobic exercise in a group setting to build up exercise capacity. Patients experienced aerobic training at 60% to 80% of baseline peak oxygen uptake (or heart rate) for 20 to 180 minutes per session. The length of training programs studied was 1-6 months in duration.  Researchers reviewed both benefits and harms of exercise.

An earlier heart study out of Washington University observed that if the heart muscle doesn’t take in more glucose in response to increased energy needs, it goes into an energy-deprived state that may raise the risk of heart attack. Conversely, if it can increase glucose intake, the heart is better protected against ischemia (low oxygen) and heart attack.

‘The heart uses both glucose and fatty acids for energy. After the training, men’s fatty acid metabolism dropped in response to energy demand, but the women’s increased. By that gauge, the women had a better response to exercise training than the men.”

Another early research study out of Duke University found that exercise especially helps those people who were labeled at-risk for heart disease. In blood samples taken after exercise, their study participants had an almost doubling of the brachial artery reactivity. This means that while exercise is beneficial for everyone, those with more cardiac risk factors may get extra benefit from exercise.

The U of A study authors report there was no evidence in the study to suggest that beginning an exercise program earlier that the typical waiting period had any detrimental effects.

“In the 1970’s, health care professionals were telling patients not to move for three months after a heart attack. Our findings suggest that stable patients need not wait a month to start exercising in a cardiac rehabilitation setting.”

Those early “stay in bed” directions of the past weren’t limited to the Coronary Care Unit. When I was a teenager, I spent one full month in my hospital bed – completely bedridden! – following a ruptured appendix and subsequent peritonitis. Nurses allowed me to get up and sit on a chair, shaky and very weak, for a few minutes at a time only when they changed the sheets. Well, no wonder I felt so weak. . .

Current medical wisdom, however, now gets open heart, knee replacement and mastectomy patients alike up out of that hospital bed and strolling the corridors as soon as reasonably possible post-op.

For heart patients, physical exercise also helps boost the nitric oxide levels in the endothelium, the lining of artery walls. One of the initial effects of coronary artery disease is damage to that lining, which exposes the vessels to harmful circulating cells. But nitric oxide released by the endothelium works to prevent red blood cells from sticking together, or aggregating, and attaching to the vessel wall. It can also work to control vascular tone, allowing the arteries to relax and stay clear.

Given that, in Canada, only one-third of patients are referred to rehabilitation after a heart attack and then only 20% of those actually attend, the U of A’s Dr. Haykowsky says the key to the best outcome is for patients to not only get referred to cardiac rehabilitation exercise programs, but to be referred early, participate and stick with it. He added:

“Exercise is a wonder drug that hasn’t been bottled.”

Even for heart patients living with chronic angina (described by Mayo Clinic as restricted blood flow to your heart that can cause recurrent episodes of chest pain called angina pectoris), it is important to work with your doctor to develop an exercise plan. Exercise can actually increase the level of pain-free activity, relieve stress, improve the heart’s blood supply, and help manage weight.

And yes, of course, sometimes, it’s not easy for us.

The other day, for example, my pedometer showed that I’d walked only 795 steps (out of my planned 5,000 step daily outing). But this total was approximately 794 more steps than I actually wanted to walk outdoors that day. Those 795 steps were at least SOMETHING on a day of crushing fatigue and distressing symptoms, a day when I really thought I would accomplish NOTHING.

Dr. Jan Gurley, who describes herself as “the only Harvard Medical School graduate to have been awarded a Shoney’s Ten-Step Pin for documented excellence in waitressing”, likes to advise:

“Think of exercise as your way of dosing yourself with health – and never skip a dose.”

Many doctors tell heart patients with angina pain to gradually build up their fitness level – for example, start with a 5-minute walk and increase over weeks or months up to 30-60 minutes. The idea is to gradually increase stamina by working at a steady pace.

This idea, however, may indeed be a tough sell to many heart patients, particularly if ongoing cardiac symptoms (frightening chest pain, fatigue, shortness of breath) make even the thought of doing any physical exercise enough to steer them back to the couch.

Let’s face it, when you’re in pain, you’re often reluctant to do anything that might increase that pain.

Consider those diagnosed with osteoarthritis of the knee – a debilitatingly painful condition. Having knee pain is self-limiting: if it hurts to walk, you want to walk less. But in a 2004 Journal of Rheumatology review of  several randomized controlled trials of patients with knee osteoarthritis, however, increased levels of physical activity were found to actually result in modest but significant improvements in disability-related outcomes, specifically pain, health-related quality of life, and strengthened muscles around the knee, thus offering stability during ambulation and transfer from one location to another.

In addition, physical activity is a useful component of effective weight loss, partly because more calories are burned with increased physical activity, and because the more you exercise, the more positively you’ll approach exercise!

And it all just makes you feel better, inside and out.

4 thoughts on “Why your heart needs work – not rest! – after a heart attack”