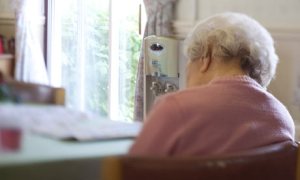 Audiences for my women’s heart health presentations are mostly female, but sometimes women will bring along their hubbies, too. One such man came up to speak to me following one of my  recent public talks. He told me in quite a stern tone that he thought all this focus on women and heart disease was “far too negative!” What I should concentrate on instead, he advised me, was the more positive fact that women live longer than men do.

Setting aside his patronizing petulance at learning the actual grim reality about women’s heart health, it turns out that he’s quite correct. But although women do generally live longer, our waning years may be far less healthy than men experience in their old age.

In the Canadian public policy report called Toward a Healthy Future: Second Report on the Health of Canadians, for example, we learn that while women do live longer than men, we are also far more likely to suffer:

Longer lives are not necessarily healthier lives, according to the World Health Organization*. Since the likelihood of disability increases with age, it’s hardly surprising that national surveys reveal increasing numbers of disabled women among older populations:

“Healthy life expectancy is not necessarily life expectancy free of disease. One general conclusion is warranted: women can generally expect to spend more years of their lives with some functional limitations compared to men. This is valid for developed as well as developing countries.

“Among the types of disability, mobility disability – in particular walking disability – is acknowledged as one of the most important quality of life and public health concerns of older women. Slow walking speed, for example, is a risk factor for falls and other accidents, resulting in fractures, further disability and loss of independence.”

Men experience an exponential rise in the risk of heart disease beginning in their 40s; in contrast, women’s overall risk of dying from heart disease does not generally begin to increase until after menopause. But women are more likely to die in the hospital and in the 30 days following a heart attack than men are. This may be because women are often older and sicker than men by the time they have a heart attack.

Recently, there was good news/bad news coming out of the European Society of Cardiology annual meetings in Paris last year: European women live longer than men because of both biological and behavioural advantages, but women’s longer lives are not necessarily healthy lives.

Italian researchers investigated longevity n 27 countries of the European Union (EU), and laid the blame for women’s poor health in old age firmly at the feet of a relative increase in tobacco and alcohol consumption in European women. Unfortunately, more and more European women smoke, and thus the gender gap is decreasing.

Smoking is particularly harmful in women, and its predictive power is also higher in women: about 25% in excess, as demonstrated in the Italian Progetto CUORE studies*.

“Life Expectancy” as defined in this study is the average number of years a person can expect to live.

In 2008, the EU Life Expectancy at birth was 82.4 years in women and 76.4 years in men, a gap of 6 years. There were marked differences among countries, ranging from 77 years in Bulgarian women to 84.8 for women in France, and in men from 66.3 years in Lithuania to 80 in Iceland.

When researchers considered “Healthy Life Years at Birth” by gender (the number of years that a person at birth is still expected to live in a healthy condition), the average proportion is 85% of healthy years in men and 80% in women.

But here’s where the research findings get interesting. The difference between Life Expectancy and Healthy Life Years at Birth is called “Life Expectancy with Disability”.

In proportion, Life Expectancy with Disability is worse in women but in absolute terms, life is longer compared to men. Disability cumulates in later life and is due to cardiovascular diseases for about 25% of participants.

Gerontologist Dr. Thomas Kirkwood​ is director of the Institute for Aging and Health at Newcastle University in England and also author of the book, Time of Our Lives: The Science of Human Aging. His theory to explain women’s longevity: in humans, as in most animal species, the state of the female body is very important for the success of reproduction. The females of most species live longer than the males. This phenomenon, he claims, suggests that the explanation for the difference within humans might lie deep in our biology.

“The fetus needs to grow inside the mother’s womb, and the infant needs to suckle at her breast. So if the female animal’s body is too weak, there is a real threat to her chances of making healthy offspring.

“But the man’s reproductive role, on the other hand, is less directly dependent on his continued good health. “

Dr. Kirkwood wrote in Scientific American that women tend to outlive men by about five to six years. And even women’s high-stress careers don’t seem to be shortening that gap.

“Women today still outlive men by about as much as their stay-at-home mothers outlived their office-going fathers a generation ago. Married men tend to live many years longer than single men, whereas married women live only a little bit longer than single women. So who actually has the easier life?

“Under the pressure of natural selection to make the best use of scarce energy supplies, our species gave higher priority to growing and reproducing than to living forever.

“Our genes treated the body as a short-term vehicle, to be maintained well enough to grow and reproduce, but not worth a greater investment in durability when the chance of dying an accidental death was so great.”

Although the reasons that women live longer than men may change with time, it does seem likely that women have been outliving men for centuries and perhaps longer.

Even with the considerable risk of death during childbirth, women lived longer than men in 1900, and it appears that women have out-survived men since at least the 16th century when the first reliable mortality data were kept. Sweden was the first country to collect data on death rates nationally; in that country’s earliest records, between 1751 and 1790, the average life expectancy at birth was an amazingly short 36 years for women and 33 years for men.

And according to Dr. Jo Ivey Boufford, president of the New York Academy of Medicine:

“The greatest threat to aging women’s health is poverty. Poverty compromises older women’s access to food, shelter, health care, social inclusion and dignity. Women of all ages make up 70% of the world’s 1.3 billion very poor, and poverty is often worsened in old age.”

There are lots of us aging women. About one in seven Canadians are 65 and older, and we have 25% more 80-year olds now compared to a decade ago. The majority – more than two-thirds – of those over-80-year olds are women.

And some of us will live to blow out 100 candles on our birthday cake one day. For example, according to Boston University School of Medicine’s New England Centenarian Study, a woman who naturally has a child after the age of 40 has a 4-times greater chance of living to 100 compared to women who do not. Bearing a child in one’s forties may indicate that the woman’s reproductive system is aging slowly and that the rest of her body is as well.

But getting older doesn’t have to mean losing your health. To stay as healthy as possible while aging, Mayo Clinic experts advise:

1. Eat well. A number of studies have shown that a healthy diet can help you live longer and better. Select foods that are nutrient dense, meaning they have lots of essential nutrients in proportion to their calories. These would include whole grains, fresh vegetables and fruits and legumes.

3. Use sun protection. Sun exposure is responsible not only for much of the skin damage associated with aging, but it puts you at risk for skin cancer.

4. Limit alcohol. Women who have more than one drink a day put themselves at increased risk of cardiovascular diseases, some cancers and liver and pancreatic diseases. Alcohol can weaken your immune system, affect your cognitive abilities and increase your risk of falling.

5. Avoid tobacco use. Smoking is linked to various cancers, as well as to high blood pressure, heart disease, stroke and lung disease.

6. Stay socially connected and intellectually curious. Having strong ties to family and friends can reduce stress and keep you healthier. Give your brain a work-out with classes, hobbies, reading and other mind-challenging activities to better maintain your memory.

7. Get regular medical and dental exams. Many diseases are treatable when detected early.

Of all these lifestyle improvements, Dr. Cheryl Phillips, president of the American Geriatrics Society, recommends this one as most important:

“Physical activity is more powerful than any medication a senior can take.”

It’s never too late to make healthy changes in your life.