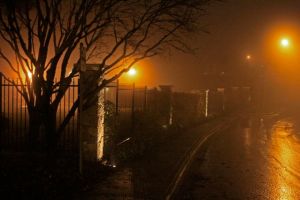 This post written by Susan Bengivingo RN* was first published on Women’s College Hospital’s Women’s Health Matters site, where I was happy to discover it so I could share it here with you:

“It was around midnight. My hospital colleague Donna Stairs and I had got the patients settled down for the night, and we were having a well-earned cup of coffee when the buzzer rang.

“The buzzer is there because our hospital is locked up at night. Visitors from the city find it strange to lock a hospital at night but it’s a security issue in rural areas like Strathmore, Alberta. We don’t have guards – just a couple of nurses!

“I went and looked out and there was a young woman, in her late 20s or early 30s, I would guess. She was wearing a long raincoat and had slippers on her feet. Let’s call her Mary.  So I buzzed the door open and she was very apologetic.

“I have a terrible pain in my shoulder,” Mary said. “And I’m feeling nauseous.”

“She said the pain had been getting more intense over the last four hours.

“Probably it’s the flu,” she said. “I’m feeling sorry now bothering you like this….”

“She’d been out with her husband and had dinner and a couple of drinks. Then they’d gone home and had sex. He’d fallen asleep, but she stayed awake feeling worse and worse.

“The fact that the pain had been getting progressively worse over four hours and that it followed exercise – sex, in this case – made me feel it was something cardiac.

“Mary told me later that she thought no way could she be having a heart attack. She was pre-menopausal; didn’t her hormones protect her?

“Donna and I got Mary on a stretcher, filled out the outpatient forms (there are no admitting clerks at night), asked her a few questions, took her vital signs, put her on oxygen and quickly did an EKG. I thanked our lucky stars that Donna was available to help and not dealing with some emergency at the other side of the hospital.

“The EKG showed Mary was having a heart attack. Donna immediately phoned the family doctor on duty (in rural facilities, the doctor on call is usually at home – not in the hospital).

“I gave Mary an aspirin to chew and a sublingual nitroglycerin, began drawing blood for the lab, started the IV and then got busy preparing the drugs I knew we’d need. I remember thinking how fortunate we are in Strathmore to receive support for certification in ACLS (Advanced Cardiac Life Support).

“We had decided she would need IV nitroglycerin to deal with the pain, heparin to thin the blood, and a thrombolytic drug (TPA) to dissolve any blood clot that might be blocking an artery and causing her heart attack.

“Dr. Joni McNeely, the duty doctor, arrived quickly. She immediately assessed the patient, looked at the EKG and gave the orders for IV nitroglycerin, heparin and TPA. She then phoned Calgary to make arrangements for transferring Mary to the city.

“We had Mary’s thrombolytic up and running within half an hour of her admission, which is within the recommended door-to-needle time.

“We were ahead of the game at this point because the EKG was easy to interpret and clearly indicated a heart attack. Sometimes we have to fax EKG readings to Calgary for confirmation from a cardiologist!

“Of course, it took a while to get a hospital that could take her and to call up our ambulance to make the transfer. Meanwhile,  I was photocopying Mary’s EKGs and her admission forms.

“Mary was in our Emergency Department for two hours before the ambulance took her to Calgary. The thrombolytic was over by that time. The ambulance doesn’t like to transport patients undergoing thrombolysis because it’s difficult to deal with problems like reperfusion arrhythmias (irregular heartbeats that can be fatal) while bumping along the highway.

“As Mary was lifted into the ambulance, I asked her: “Do you want me to phone your husband?”

“I’d better do that myself,” she said, and she smiled. I thought that smile was a good sign.

“In Calgary, Mary was whisked into the Coronary Care Unit. She underwent coronary angiography and received an angioplasty. We could give ourselves a pat on the back because we had got her stabilized and had administered drug therapy in time to stop the progression of her heart attack. That meant we had saved a lot of heart muscle – and effectively saved Mary.

“I hope her husband wasn’t too shocked when she phoned him!

“I remember Mary, because she could so easily have been a statistic in the mortality tables. If she hadn’t come to us for help, she might have died.

“As it is, I saw her last Thursday out shopping in Strathmore with her two youngest kids!

“Some women think they shouldn’t call an ambulance when they have chest pain or feel unwell. They are afraid that when they get to the hospital, we will laugh at them or get mad.

“Come with your chest pain!

“It is a million times better to come in with pain than to stay away. And you should remember too that heart attacks in women don’t necessarily have the same symptoms as they do in men. You may not even feel chest pain. This really is an issue you need to discuss with your family doctor, especially if you have any risk factors for heart disease.

“Finally I’d like to say I love this job of mine! I love the excitement, the opportunity it gives me to meet a lot of wonderful people, and the feeling of being able to do some good in this world.”

* I’m sad to tell you that Susan Bengivingo, who wrote this story, died on March 15, 2105 in the same hospital where she had cared for so many others.  My sincere condolences to her family. (See comments below from her husband Rick and brother-in-law Randy). Sue was a registered nurse for over 40 years in Alberta. The Strathmore hospital she wrote about here is typical of the primary care centres upon which rural Canadians depend. The hospital has 20 inpatient beds, a labour and delivery bed, an emergency department, and lab and X-ray services.  And very dedicated nurses!

14 thoughts on “Three women, one heart attack and a sound asleep husband”