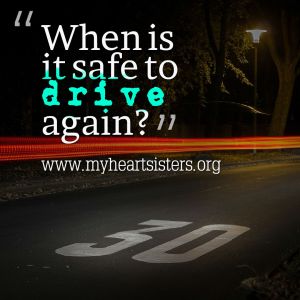 Almost all freshly-diagnosed heart patients are warned not to drive for a specific period of time following hospital discharge, ranging anywhere from 24 hours to several months, depending on the specific cardiac issue.  And in the earliest days or weeks, we may have mixed emotions even thinking about getting behind the wheel of a car again.

Some of us might feel afraid to drive (“What if I have another cardiac emergency while driving by myself on the highway?”).  A Swedish study that followed drivers living with chronic illness (including cardiovascular disease) over a 10-year period found that very few road accidents were directly caused by either the disease or its treatment after early driving restriction time periods had passed (just 0·8% of all cases).  Despite those stats, the researchers reported that many individual drivers voluntarily surrendered their driving license post-diagnosis because of the personal decision that “my state of health was no longer compatible with safe driving.” (1)

Some of us, however, can’t wait to grab our own car keys, a major psychological step toward being able to feel “normal” again (a quality of life factor that’s often diminished by being suddenly dependent on others to drive us around).

Ironically, drivers themselves are rarely the best qualified to accurately assess our own competence to drive. We know, for example, that even the worst drivers on the road rate their own driving competence far higher than it actually is. Just try arguing with a drunk who insists he’s okay to drive home from the pub. . .  Here’s an example of that: a study on drivers living with chronic pain noted “chronic pain patients rated their subjective driving quality to be ‘normal’, although their road driving testing ratings and degree of alertness were actually significantly lower.” (2)

The good news: governments that regulate road safety do assume that most people diagnosed with a heart condition (with some exceptions – see list below*) will eventually be fit to drive again, and almost all have guidelines created with the help of medical experts. Here in Canada, doctors refer to guidelines called Assessment of the Cardiac Patient for Fitness to Drive, a partnership project between the Canadian Cardiovascular Society and public road safety agencies.

I recently raised this issue with other women who are living with heart disease, and here’s a sampling of their comments:

Let’s consider a commonly imposed post-op driving restriction: if you have just undergone open heart surgery, for example, it’s likely that you were told you cannot drive for 4-6 weeks now, depending on your physician’s assessment of your recovery.

I’ve heard from a number of heart patients who question this guideline, arguing that they “need” to drive, or that they felt well enough to drive long before that time restriction expired, or that driving is their “right”. (EARTH TO DRIVERS: driving is a privilege, not a right). Many heart patients express frustration about arbitrarily strict rules imposed on them by road safety bureaucrats.

But consider the perspective of this patient who shared an opposing view on an online open heart surgery patient community:

“Six weeks with no driving is not unreasonable!
.
“Some of the drugs you’re now taking for post-op pain even warn right on the label: “Do not drive while taking this medication”.  After your surgery, your sternum is healing. You wouldn’t pedal a bike after breaking your leg, would you? Driving a car requires you to be alert, mentally and physically. Many heart patients can have complications in the early weeks after surgery ranging from heart rhythm problems to high blood pressure, low blood pressure, balance issues, nerve damage problems, and even severe cardiac complications like heart attack. Do you want to discover you have any of these issues while operating a 3,500-pound land missile on a busy highway?
.
“To drive in the first six weeks despite being told NOT to drive by a physician places you in huge legal problems if you do have an accident. You’re putting not only you but other innocent people around you at risk – and you would be wholly responsible if you cause an accident!

.
“Lastly, consider this. Let’s say you’re a recent open heart surgery patient who lost consciousness or became disoriented while driving, slammed into my family’s car, and managed to survive. As soon as my lawyer learned that you were less than six weeks post-op, that lawyer would grind you into pulp, financially and legally! Your insurance company might not even cover you because you were not supposed to be driving. Your doctor could be called to testify that you should NOT have been at the wheel, as would any other expert witnesses.
.
“If I sound pretty harsh, it’s for a reason. We recently had a neighbour who had surgery, behind the wheel just two weeks after his procedure. He blacked out and slammed into the rear end of a car, killing two little kids and seriously injuring their parents. What kind of an idiot does this after being told by a doctor not to drive?  This is why you don’t drive in the first six weeks!”
.

* Recommended wait times before driving after a cardiac event may vary depending on where you live, but here are some representative examples from Québec of general guidelines for specific cardiac conditions:
.

If you’re a commercial driver (e.g. a professional taxi, bus or truck driver), you will likely face even longer periods of driving restrictions following a cardiac event. In the UK, for example, where they appear to be very serious about this, guidelines updated in 2017 called Can I Drive if I Have a Heart Condition? warn of personal fines of up to £1,000 or legal prosecution if a patient fails to notify the local Driver and Vehicle Licensing Agency about a recent cardiac diagnosis before driving commercially.

Even physicians know that they too can be involved if their patients who are not competent to drive because of a medical condition or treatment cause death or injury to another person while driving because the physician involved has failed in what the law calls the duty to warn. For example, in The Medical Malpractice Survival Handbook, Dr. Sandy Sanbar writes(3):

“The courts have imposed on physicians the duty to warn when medications with potentially dangerous side effects are administered. The same duty is owed to patients engaged in any activity that may be hazardous, such as driving a car or operating machinery.”

Generally, before you drive again, you should always get your physician’s advice. You will probably be able to drive as long as:

Q:  Has your diagnosis affected your ability to drive? Have you ever had a close call while driving because of ongoing symptoms?

NOTE FROM CAROLYN:  I wrote much more about practical day-to-day issues facing recovering heart patients in my book “A Woman’s Guide to Living with Heart Disease” . You can ask for it at your local library or favourite bookshop, or order it online (paperback, hardcover or e-book) at Amazon – or order it directly from my publisher, Johns Hopkins University Press (use their code HTWN to save 30% off the list price).

How soon are heart patients safely fit to fly?

37 thoughts on “How soon are heart patients safely fit to drive?”