Since 1973 (when I was just a tiny baby), my work background has been in journalism, communications and public relations, spanning almost four decades in corporate, government and non-profit sectors ranging from Mercedes Benz to the Salvation Army. I’m a refugee from the Niagara Falls area to the balmy west coast of Canada; I’m the author of two west coast travel books and one book about living with heart disease;  my little garden won a national garden contest from Gardening Life magazine; I once had lunch with His Royal Highness Prince Edward  (yes, that Prince Edward); and many years ago while I was a student at Queen’s University, I accidentally smashed our old Buick into the station wagon owned by “The English Patient” author, Michael Ondaatje.

I have two grown kidlets who, luckily for me, live close by with their respective families: my son Ben, his wife Paula and the adorable Baby Zack have recently moved into their first home about eight blocks away from me, while my daughter Larissa, her hubby Randy and their  charming 6-year old daughter Everly Rose live even closer!

But in May 2008, while working at the Victoria Hospice and Palliative Care Society, I became a member of an exclusive club that nobody ever wants to join:  I was hospitalized for a myocardial infarction, what doctors call the “widow-maker” heart attack.

But here’s the frightening part of this story: two weeks earlier, I had actually been sent home from the same hospital’s Emergency Department with a misdiagnosis of acid reflux, despite presenting with textbook Hollywood heart attack symptoms like chest pain, nausea, sweating, and pain radiating down my left arm. “You’re in the right demographic for acid reflux!” was the confident pronouncement of my E.D. physician.

I left hospital that day feeling supremely embarrassed and apologetic because I’d made a big fuss “over nothing!”  I continued to suffer increasingly debilitating symptoms for two full weeks (but hey! at least I knew it wasn’t my heart!) until symptoms finally became so severely unbearable that I again sought medical help – this time to a revised diagnosis of “significant heart disease”.

I later learned (while attending the WomenHeart Science & Leadership Symposium at the world-famous Mayo Clinic) that, according to research published in the New England Journal of Medicine, women my age and younger are seven times more likely to be misdiagnosed in mid-heart attack and sent home from Emergency compared to our male counterparts presenting with identical symptoms.(1)

I launched this blog Heart Sisters in 2009, mostly just to help publicize my free “Pinot & Prevention” presentations on women’s heart health I started doing after returning from that Mayo training.  It’s grown like Topsy, with over 19 million views so far from 190 countries! I call my blogging “cardiac rehab for my brain”. My writing’s also been published internationally, including in the British Medical Journal.  And in 2014, the BMJ invited me to be a Patient Reviewer for cardiology papers submitted to the journal for publication, part of their innovative peer review process.

Johns Hopkins University Press approached me in 2015 to ask if I’d ever considered writing a book based on my Heart Sisters blog articles. Thus began a two-year adventure culminating in my book called “A Woman’s Guide to Living With Heart Disease” (ask for it at your local library, favourite bookshop or order online and save 20% off the list price by using the JHUP discount code HTWN when you order!)

.Here are some examples of media coverage about my experience of heart attack and survival at:

Are Women Left Behind in Heart Disease Research? – my March 12, 2011 interview with Catherine Morgan of Blogher

The Heart of the Matter – a Patient Focus feature in the industry journal BioSupply Trends (see page 68), January 2012

Heartburn or a Heart Attack? – in Ladies Home Journal, February 2012

What Women Survivors Want You to Know from The Heart and Stroke Foundation, February 2012

When Doctors Make Bad Calls in The Globe and Mail, February 2012

What Women Survivors Want You to Know from The Heart and Stroke Foundation, March 2012

What Women Need To Know About Heart Attacks in the Huffington Post, September 2013

Heart Disease Isn’t Just For Men, After All – André Picard’s health column in The Globe and Mail, November 11, 2014

The Surprising Way to Stay Safe in Hospital – Consumer Reports, December 16, 2014 (not surprisingly, in the Don’t Worry About Being a Pest section)

Empowerment Comes From Knowledge At ‘Your Heart, Your Health’ – Vancouver Coastal Health Research Institute, May 25, 2015 (photo below)

Raising Heart Disease Awareness Among Women – Global News BC, June 5, 2015 (photo below; interview starts about 1:01 into the clip) 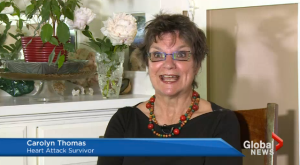 This is Your Heart – National Post and (online) Personal Health News, February 19, 2016

Why is Heart Disease in Canadian Women Still Being Missed?  – Globe and Mail, March 6, 2016.

2016 Experts by Experience: A Compilation of Patient Stories (my essay “Welcome To Your New Country” on page 8) – Stanford University School of Medicine/ Inspire, June 2016.

What You Need to Know About Stroke & Heart Disease, Canadian Living, February 2017.

Having a Heart to Heart About Life-Saving Tools – Victoria Times-Colonist, October 28, 2017

One Woman on Her Emotional Challenges After a Heart Attack“ (Thanks Kathleen for including my pre-discharge advice!) March 2018 issue of Canadian Living. 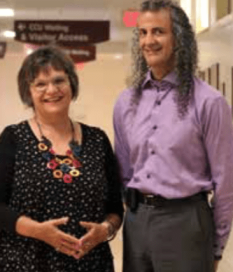 Why Heart Disease is the Leading Cause of Death in Women, and Why Many Women are Unaware of the Risks They Face, South China Morning Post, Hong Kong, February 27, 2018. 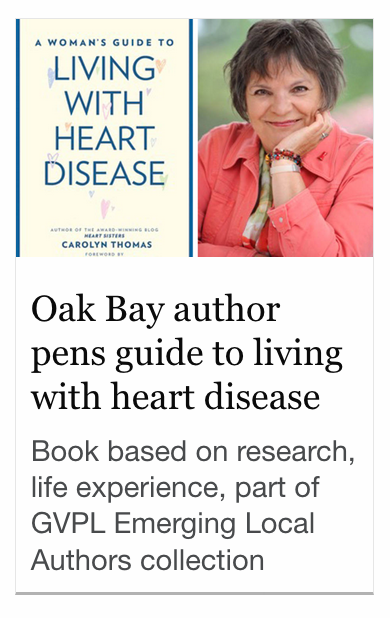 .The New and (Un)improved Doctor-Patient Relationship: a 10-minute podcast by Michael Joyce at Health News Review (my interview starts at about 5:35)

The Link Between Pregnancy Complications And Heart Health: What You Need To Know – Chatelaine magazine, October 2018

CBC radio interview with Sheryl MacKay of North By NorthWest about women, heart disease and what surprised her while reading my new book (about 17 minutes, between 1:18-1:35) February 2019

♥ Watch this 22-minute documentary called “A Typical Heart“, a remarkable Canadian film about the deadly disparity between male and female heart disease, as experienced through the lens of healthcare professionals, researchers, patients and their families (NOTE: I was one of the eight Canadian heart patients interviewed).

For those who like to believe that I must have needed a cardiac crisis to add meaning to an otherwise meaningless existence (I didn’t!),  here’s how you might like to view the bright side of my story. If I’d never had that heart attack:

But those are the only bright sides. I’d really love my old life back. Please . . .