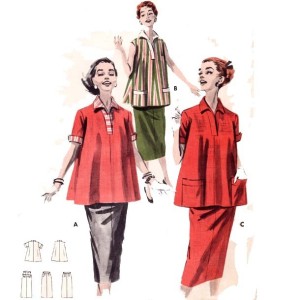 When my mother was pregnant with me in 1950, mothers-to-be were very afraid of weight gain.  Back then, doctors had spent at least two decades warning pregnant women against gaining too much weight,  believing that excess pounds would lead to dangerous conditions like pre-eclampsia or toxemia. And lower weight gain would also ensure “preservation of one’s figure”.

In fact, I recall Mum’s stories about actually starving herself during the 2-3 days before each monthly prenatal appointment weigh-in so as not to incur the disapproval of her obstetrician. She was not alone. The average total pregnancy weight gain of North American women in 1950 was less than 20 pounds.

Less than 20 pounds?   This severe weight gain restriction was significant.

Current obstetrical guidelines suggest, for example, that at least 20 pounds of a pregnancy weight gain of 30-35 pounds (Health Canada’s recommended gain for a normal-weight woman) consist of the fetus, placenta, amniotic fluid, uterine and breast hypertrophy and increased blood volume. (This recommended pregnancy weight gain, by the way, has almost doubled from the 1930s to the present).

It could also be significant when the warnings of researchers like British physician and epidemiologist Dr. David Barker are considered. His theory:  the roots of future chronic conditions like heart disease stem from a developing baby’s environment in the womb.

Dr. Barker was the invited speaker at this year’s Stare-Hegsted Lecture at the Harvard School of Public Health, where he covered the basics of what the British Medical Journal dubbed The Barker Hypothesis, based on his work called Fetal Origins of Coronary Heart Disease.

“During the first thousand days of development, from conception to age two, the body’s tissues, organs, and systems are exquisitely sensitive to conditions in their environment during various windows of time. A lack of nutrients or an overabundance of them during these windows programs a child’s development and sets the stage for health or disease.”

“When a fetus is faced with a poor food supply, it shunts nutrients to its most important organ, the brain. The heart, kidneys, muscles, bones, and other tissues don’t develop as they should. The nutrition debt they incur appears years later as one or more chronic diseases.”

Skerrett adds that several studies also suggest that the combination of low weight at birth and becoming overweight early in life may be a potent recipe for later heart disease.

For example, a Swedish twin study* suggested that the shorter twin in a twin pair was more likely to die of heart disease than the taller one.  Scientists from Finland and the U.K. later found that lower weight at birth may increase inflammatory processes in adulthood, which are associated with chronic diseases such as heart disease.  In this study** that followed 5,600 children for 40 years, researchers found that, compared to children with ‘normal’ weight in the first year of life, babies born relatively smaller and who gained the least weight during infancy had a higher number of white blood cells, an indicator of inflammation, in adulthood.

“Our findings suggest that the link between poorer growth early in life and these adult chronic diseases may involve inflammation as a common underlying factor.”

Lest it appear that I’m blaming my dear old mother for my heart attack because of her crazy dieting throughout pregnancy – believe me, I’m not! –  the reality is that we are learning every day about emerging cardiac risk factors that may have long ago damaged those delicate endothelial cells lining our coronary arteries.

We already know, for example, that heart disease is generally at least 20-30 years in the making.  As I like to tell my women’s heart health presentation audiences:

“I didn’t have a heart attack because I ate a piece of bacon, or had a hard day at work”.

But something, somehow, decades earlier, had compromised my coronary arteries.  From sleep breathing disorders to (our own) pregnancy complications or chronic inflammation, scientists are now investigating links to subsequent cardiovascular disease that weren’t even on their radar until recently.

And sometimes, we simply have no clue why bad things happen.

** “Weight at Birth and Infancy in Relation to Adult Leukocyte Count: a Population-Based Study of 5,619 Men and Women Followed From the Fetal Period to Adulthood”. Journal of Clinical Endocrinology & Metabolism, June 2009

2 thoughts on “Could heart disease have its roots in your mother’s womb?”