Cath Haywood recalls the day in 2006 when she felt a bit “under the weather”. She told her family that her arm ached. At first, she attributed the arm pain to over-enthusiastic ball throwing – she had been tossing lobs to her springer spaniel earlier that day. But on the following evening, the 49-year old former Welsh police officer again experienced what she describes as “a dreadful ache in my right arm”. She remembers thinking:

“I’ve really got to lay off throwing that ball!”

As the arm pain got worse, Cath brushed aside pleas from her husband and two sons to call an ambulance, and she went to bed. After all, as she told herself, she was fit, relatively young, had just lost 28 pounds, did not smoke, and drank only occasionally. So why bother the ambulance crew?

Finally, however, she relented, and was shocked to learn at the hospital that she had indeed suffered a heart attack.

She was also shocked to find out that in at least 10% of women’s heart attacks,  there is no form of chest pain at all.(1) Nothing. Zero. Zilch. Nada.

Although in many heart attacks, pain can begin in the chest and spread to other areas, even when there’s no chest pain as an initial symptom, heart attack signs may include pain or discomfort in the left, right or both arms or in the shoulders, elbows, back, neck, throat, lower jaw or stomach. Or as Mayo Clinic cardiologists call it: anything “from neck to navel”.

Men having a heart attack often feel pain in the left arm. In women, the pain is more likely to be felt in either arm. The pain might also come and go. In a previous post called “How Does It Really Feel to Have a Heart Attack? Women Survivors Tell Their Stories”, a number of women interviewed also described unusual elbow pain as an early heart attack symptom.

Why would a heart attack cause pain or discomfort in our arm?

Here’s the technical gobbledygook reason, according to an Indiana cardiac surgeon who answered a patient’s question on HealthTap:

“The pericardium is innervated by C3,4,5 (Phrenic nerve). There may be some neuronal connections to the intercostobrachial nerves.”

(And doctors sometimes wonder why their patients don’t seem to understand them . . .)

Allow me to translate that HealthTap Geek-Speak for you: basically, it’s because of referred pain to the arm.

For example, your heart attack may cause a sensation of pain to travel from your heart to your spinal cord, where many nerves merge onto the same nerve pathway. Your arm may be perfectly fine, but your brain thinks that part of the heart’s pain is the arm (or the jaw or the shoulder or the elbow or the neck or the upper back) calling out for help. That’s what referred pain is.

When  your heart muscle cells begin to run out of oxygen during a heart attack because of a blocked artery preventing oxygenated blood from feeding that muscle, they begin to send off signals of pain through the nervous system. Your brain may confuse those nerve signals with signals coming from the arm (or the jaw, shoulder, elbow, neck or upper back) because of the nerve proximity.

So there are times that we can feel both chest pain and arm pain when our heart muscle is not getting enough oxygen, but there are other times that discomfort in either arm (or the jaw, shoulder, elbow, neck or upper back) may be the only symptom of a heart attack.

In fact, arm pain may be one of the first indications that a heart attack is about to occur. Arm pain has also been reported as the cause of significant sleep disturbances even days before a heart attack.

You might not even describe this symptom as “pain”.  Instead, you may feel it as electrical, tingling, pins-and-needles, dull ache, weakness, heaviness, fullness, or a crushing feeling.

These symptoms may come and go, and can also fluctuate in severity. They can hit both before and during a heart attack. And remember that heart attack symptoms don’t necessarily include any arm discomfort. 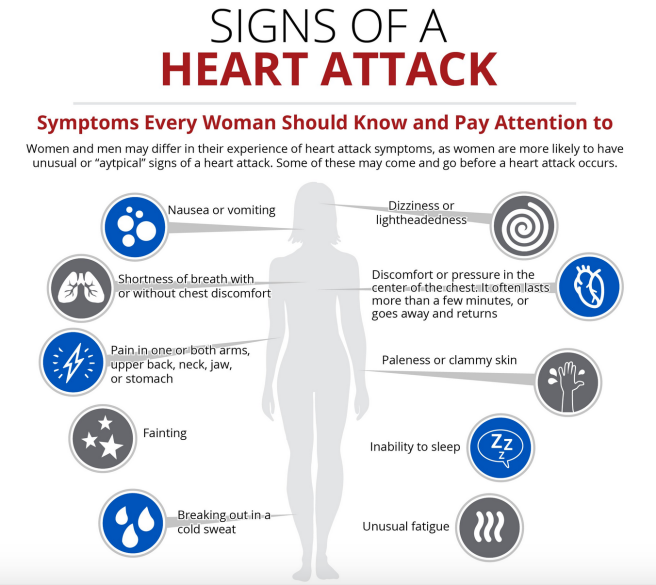 What else could it be?

Arm pain on its own, of course, can have nothing to do with heart issues. Intermittent arm pain may be due to something as simple as repetitive strain injuries experienced during typing, video gaming or text messaging, especially if done while in an awkward position or while leaning forward to see the screen.

Arm pain can also be caused by a number of other factors. Try keeping a log of symptoms, the severity, time and date they occurred, what you were doing/eating/feeling in the hours leading up to that symptom.  Ask your doctor about all possible causes of arm pain, especially if pain becomes severe.
.

NOTE FROM CAROLYN:   I wrote more about arm pain and other cardiac symptoms in my book, “A Woman’s Guide to Living with Heart Disease” (Johns Hopkins University, 2017). You can ask for it at your local library or favourite bookshop, or order it online (paperback, hardcover or e-book) at Amazon, or order it directly from Johns Hopkins University Press (and use their code HTWN to save 20% off the list price when you order).

Q:  Have you experienced symptoms in your arm during a cardiac event?

How does it really feel to have a heart attack? Women survivors tell their stories

The freakish nature of cardiac pain

Time equals muscle during women’s heart attack
.
Women fatally unaware of heart attack symptoms
.
Is it heartburn or heart attack?
.
What is causing my chest pain?
.
Is it a heart attack – or a panic attack?

30 thoughts on “Why does your arm hurt during a heart attack?”