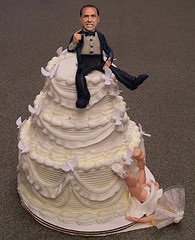 Did you know that men who are married – happily or not – are generally far healthier than their unmarried buddies?  A man’s physical health apparently benefits simply from the state of being married, whether or not he rates it as a good marriage.

But a woman’s overall health can be significantly threatened by trouble at home, according to researchers at the University of Utah.(1)  Women respond to unhappy marriages by being three times more likely to develop metabolic syndrome – a cluster of serious cardiac risk factors that can lead to heart disease.

The Utah researchers recruited 280 couples married an average of 20 years. Each couple was assessed on:

Couples with pre-existing heart disease were excluded. Researchers found that both men and women were more likely to display symptoms of depression if they reported marital strain. However, men did not have a related increase in other health problems. Women, on the other hand, saw their risk of metabolic syndrome go up when they experienced more negative aspects of marriage compared to women with more positive aspects.

What about single, divorced or women who are “between husbands”?  After accounting for a variety of factors, there were no statistically significant differences between happily married women and unmarried women.

Women who were consistently dissatisfied with their marriage had three times the risk of developing metabolic syndrome compared with happily-married women. But this finding didn’t hold for women who were only dissatisfied with their marriage for a short-term period. Women who reported marital satisfaction following only one assessment had a risk of developing metabolic syndrome similar to that of the happily married women.  The Utah researchers wrote:

Dr. Sheldon Tobe of The Heart & Stroke Foundation also found that women are more physically affected by relationships than men are – but that these effects can actually work to our benefit.  His research showed that a happy marriage could help cancel out the blood pressure-raising effects of a very stressful job:

Find out more from Mayo Clinic about the symptoms, causes and prevention of metabolic syndrome.

NOTE from CAROLYN:  I wrote much more about women’s lived experience in my book “A Woman’s Guide to Living with Heart Disease“ (Johns Hopkins University Press, 2017).  You can ask for it at your local library or favourite bookshop, or order it online (paperback, hardcover or e-book) at Amazon, or order it directly from my publisher, Johns Hopkins University Press (use the code HTWN to save 20% off the list price).

When being married makes being sick worse

“Stress creep”: are you like the frog in the pot of boiling water?

Four ingredients in the heart patient’s recipe for stress

Is everyday stress gnawing at your arteries?

Is family stress hurting your heart?

Got A minute? Try this mini-relaxation for your heart health