If you – like me – have had a heart attack, you are now likely taking a fistful of medications each morning, everything from anti-platelet drugs to help prevent a new blockage from forming inside your metal stent to meds that can help lower your blood pressure. All of these cardiac drugs have been studied by researchers before being approved by government regulators as being safe and effective for us to take every day.

But one particular study on this subject published in the Journal of the American College of Cardiology(1) raised a unique point:

“Little is known about the benefits and risks of longterm use of cardiovascular drugs. Clinical trials rarely go beyond a few years of follow-up, but patients are often given continuous treatment with multiple drugs well into old age.”

END_OF_DOCUMENT_TOKEN_TO_BE_REPLACED 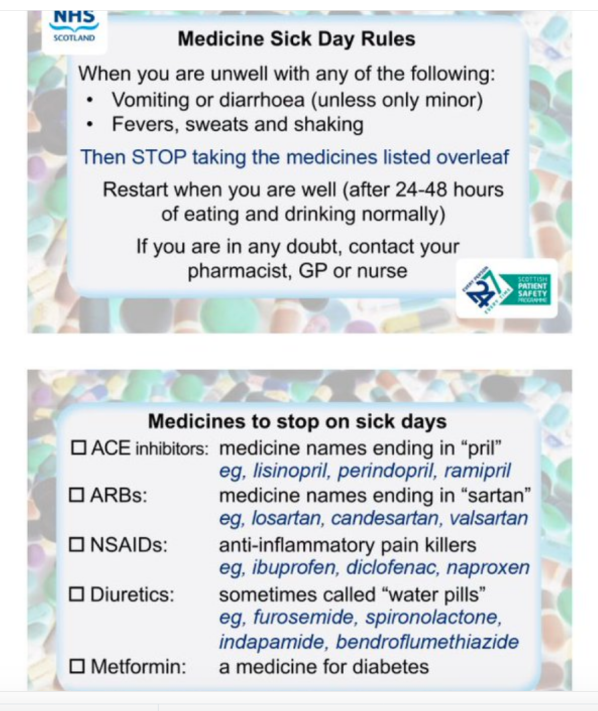 Earlier this year, I spent a few days collapsed in bed, fighting off the death grip of some kind of horrible flu-like symptoms that included a high fever, chills, drenching sweats and uncontrollable shivers. I was miserable. But I didn’t call my family doctor because:

Like a good little heart patient, I continued taking my regular fistful of daily prescribed cardiac medications day after day while I was deathly ill. I did this because nobody had ever told me that, while suffering the dehydrating symptoms mentioned here, many patients should consider taking a temporary holiday from certain drugs that can make dehydration worse. Dehydration means the body lacks enough fluid to function properly, and if it worsens over time, can lead to potentially serious side effects, including kidney injury.  END_OF_DOCUMENT_TOKEN_TO_BE_REPLACED

Dr. Lisa Rosenbaum writes in the New England Journal of Medicine about a friend who is worried about her father since two of his sisters have recently died following strokes.  She asks her friend:

“Oh, heavens, no,” the friend replies. “My parents are totally against taking any medications.”

“They don’t believe in them.”

Curious about what she calls this instinctive non-belief, a commonly observed reluctance to take the medications their physicians recommend (aka non-compliance or the slightly less patronizing non-adherence), Dr. Rosenbaum wanted to understand how patients feel about taking cardiac medications. The consequences of not taking one’s meds can be deadly, yet almost half of all heart patients are famously reluctant to do so.(1)   Dr. Rosenbaum, a cardiologist at Boston’s Brigham and Women’s Hospital, wondered: Are there emotional barriers? Where do they come from? Can we find better ways of increasing medication adherence if we understand these barriers?*

So she interviewed patients who’d had a myocardial infarction (heart attack), both at the time of the initial cardiac event, and again months later.  Their answers fell into five distinct themes that might be surprising to doctors feeling frustrated by their non-compliant patients. END_OF_DOCUMENT_TOKEN_TO_BE_REPLACED

One of the most surprising additions to the daily morning routine since my heart attack has been the fistful of pills that I now take every day.

It can be a confusing mix of medications, each for a different purpose, and each with different benefits and side effects.  Here’s just a sampling of some of the more common cardiac meds that doctors prescribe for heart patients. END_OF_DOCUMENT_TOKEN_TO_BE_REPLACED