Based on a post originally published here on May 13, 2012

As Christopher Buckley wrote in his memoir, Losing Mum and Pup, when the last of your parents dies, you are an orphan. This is poignantly true if that parent is your mother.

“You lose the true keeper of your memories, your triumphs, your losses. Your mother is a scrapbook for all your enthusiasms. She is the one who validates and the one who shames, and when she’s gone, you are alone in a terrible way.”

This month marks both the occasion of my mother’s birthday (she would have turned 89 on May 7th, which was coincidentally the second birthday of Everly Rose, the adorable great-granddaughter whom she would never meet) and yet another Mother’s Day when I didn’t send my Mom a card and flowers. I’m getting used to that reality by now. She died five years ago on February 21st, 2012.

My mother’s life began on a rural Manitoba farm in unspeakable poverty and abuse, a true story so hideous that it reads like fiction. She was somehow able to overcome the trauma of this horrific childhood through pure tenacity and a fierce work ethic (as we described in her obituary) – as well as one brilliant stroke of pure luck.

As a teenager in the 1940s, one day she met a very good-looking young man named Peter who, like her, loved to dance. The two fell in love and then kept up that love affair – and their dancing – throughout almost four decades together until his death in 1983.

My mother raised five children, largely using pure animal instinct. She’d had no personal role models for good mothering. As a child, she never knew what it felt like be kissed, hugged or even treated kindly by a parent. She had only a third grade education. And at the age of 13, she’d been sent away on the train to distant relatives in Ontario because, as she told us in her matter-of-fact tone: “I was too expensive to feed“.

But even as a new mother in 1950, she somehow trusted her own innate ability to care for her firstborn child (me!) For example, she could not bear to hear babies “cry themselves to sleep” – a common parenting trend in those days. So every evening, her baby would be sung to sleep in a rocking chair near the window. This bedtime routine continued for all five of her babies over 15 years (my sister Catherine and I were taking turns rocking our baby brothers to sleep by then).

And despite the popularity of the ultra modern custom of bottle-feeding in the 1950s, my mother was a trailblazer in breastfeeding each of her five babies – despite little support from either her family doctor or any of her bottle-feeding friends. For example, although she was a full-time working mother when I was born, she and my babysitter arranged a clever way to signal when her hungry baby woke up. The sitter, who lived right across the street from my parent’s corner grocery store, would close her living room curtains when I was ready for feeding. During the day, my mother would constantly check that window, and run across the street to nurse her baby if the curtains were closed. After feeding time, the curtains could open again until the next signal was due.

Until I had my own babies three decades later, I never truly appreciated how heartbreaking it must have been for her to have a sick child (my little brother, David, who was in and out of hospital throughout his toddlerhood) – as well as working full-time and raising her four older children.

As a mother, she was strict, no-nonsense and demanding with her children – all to avoid producing a child with a “swelled head” – the worst possible fate that could befall any kid. She was a “crazy-go-nuts” hard worker, and mercilessly expected the same from those around her. She was short on praise, and long on expectations. You rarely had to wonder what Mom’s opinion on any subject was because she felt freely entitled to rant with an Archie Bunker-like zeal in spite of her children’s embarrassed protests: “MOM! You can’t TALK like that!”

She also had a wicked sense of humour, and a wonderful face that crinkled with delight when she laughed. My mother’s self-taught cooking and baking skills were legendary, and will live on in her favourite recipes passed down through generations of her descendents – although no baker on earth could possibly duplicate my all-time favourite birthday cake: her famous Seven-Layer Mocha Walnut Torte.

As a Baba (grandmother), she showered affection and gifts upon her 11 grandbabies in a way her own children rarely experienced, but in the universal way that grandmothers everywhere might recognize.

Tragically, dementia stole the last few years of my mother’s astonishing life. When I survived a “widow maker” heart attack in 2008 (on the way home from celebrating her 80th birthday), we made a family decision not to even tell her. She lived thousands of miles away, after all, was lucid during only brief periods each day, and would likely either forget this news, or be confused and worried at being repeatedly reminded of something bad happening to one of her children.

And finally, as I spend Mother’s Day with my own wonderful kidlets today, we’ll all be thinking of their Baba and remembering that she’s responsible for the people we have become. I know she would have heartily agreed with Tenneva Jordan‘s famous definition of motherhood:

“A mother is a person who, seeing there are only four pieces of pie for five people, promptly announces she never did care for pie.” 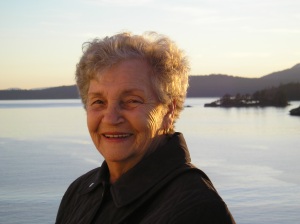 Q:  Are you too marking Mother’s Day without your mom this year?

32 thoughts on “A Mother’s Day without my mother”