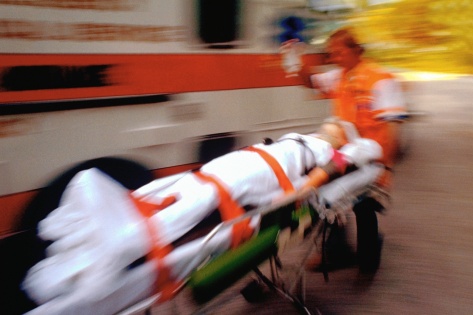 I finally realized that I was in big trouble during a five-hour flight from Ottawa to Vancouver.  But I’d been told emphatically by an Emergency Department physician two weeks earlier that my problem was just acid reflux – not a heart attack.

So for two weeks, I’d endured increasingly debilitating attacks of chest pain, pain radiating down my left arm, sweating and nausea.  But hey! – at least I knew it wasn’t my heart.  A man with the letters M.D. after his name had told me so.

I suffered two more attacks in the Ottawa airport before boarding, and two more during that endless flight to Vancouver.  At no time did I consider saying anything to the Air Canada flight attendants about my growing distress.  I sure didn’t want to be one of those passengers they have to turn the plane around for because of a medical emergency. How embarrassing would that be – and all just for indigestion?

I did somehow survive that flight, and returned to Emergency after I arrived home – but still not thinking “heart”. What I really wanted, I thought at the time, were serious drugs to combat this brutal case of acid reflux I’d been misdiagnosed with. . . It was at that second visit that staff finally called in a cardiologist, who this time told me emphatically that I had “significant heart disease”.   See also: When heart attack symptoms disappear – and then come back

Women like me are more likely than men to delay seeking treatment despite clear signs of a heart attack, a behaviour pattern that has puzzled cardiologists and contributes to the higher mortality rate from heart attack among women.

And even when we do seek help immediately, as a study published in the New England Journal of Medicine showed, women are seven times more likely to be misdiagnosed and sent home from the Emergency Department in mid-heart attack compared to men.(1)

An interesting Oregon Health & Science University study published in The American Journal of Critical Care confirmed women’s treatment-seeking delay behaviour – and also helped me feel less embarrassed and alone for my own treatment-seeking delay decisions.  Oregon researchers identified six common patterns of behaviour between the time that women first know they are experiencing serious symptoms and the time when they go for help.

These six patterns are:

Even women in that first ‘knowing and going’  behaviour group admitted being confused about the symptoms of a heart attack. The biggest obstacle to reducing women’s treatment-seeking delays, according to the Journal of  Social Science & Medicine, is in fact women’s lack of awareness in interpreting heart attack symptoms.

This period between the onset of acute symptoms and getting urgent medical help can be divided into three distinct phases:

Only the first phase is the one you have complete control over. Don’t blow it.

You know your own body.

You know if something does not feel right.

If you experience troubling symptoms that may be heart-related, do the following:

Please do NOT do what I did by delaying my decision to get help. Put yourself in that ‘knowing and going’ behaviour group.

This is NOT what a woman’s heart attack looks like

Too embarrassed to call 911 during a heart attack?

‘Gaslighting’ – or, why women are just too darned emotional during their heart attacks

How can we get female heart patients past the E.R. gatekeepers?

Early warning signs: how women can tell if they’re headed for a heart attack

Why we ignore serious symptoms

NOTE FROM CAROLYN:  I wrote more about women’s treatment-seeking delay behaviour in my book, A Woman’s Guide to Living with Heart Disease (Johns Hopkins University Press, 2017). You can ask for this book at your local bookshop, or order it online (paperback, hardcover or e-book) at Amazon – or order it directly from Johns Hopkins University Press (use their code HTWN to save 30% off the list price when you order).