This is a man told by the photographer to act like he’s having a heart attack.

One of the reasons that I knew I wasn’t having a heart attack (even while I was actually having one) was my very inaccurate stereotype of what a woman’s heart attack can look like.

Wrong, my dear heart sisters. That’s NOT a heart attack.

A cardiac arrest is more like an electrical problem that causes the heart to stop beating and lungs to stop breathing. A heart attack, on the other hand, is more like a plumbing problem. It happens when the blood supply to the heart muscle is slowed or stopped because of a blockage or spasm in one or more coronary arteries, but the heart does not stop beating (unless the damage to heart muscle is so severe that a fatal arrhythmia – an electrical misfire – happens, triggering sudden cardiac arrest).

Women’s heart attack symptoms can range from severe to vague – and everything in between. Chest pain is the most common heart attack sign in both men and women, but remember that many women may not even use the word “pain” to describe chest symptoms (often replacing that with words like heavy, pressure, dull, ache, fullness, etc.) Depending on which research study you find,  between 10-40% of women report NO chest symptoms during a heart attack. Every woman is different, of course, but here are just some of many symptom options:

Now, here’s why I suspect that those dramatic yet misleading cardiac arrest photos are dangerous:  if women mistakenly think that a “real” heart attack is one that always looks like that guy and his buddies (because almost all media articles we see about heart attacks feature pictures that look just like him), we may not believe our own symptoms are heart-related at all.

So if you’re an editor or journalist writing about heart attacks, please learn the differences between these two distinct conditions and advise whoever is picking out images NOT to use photos of men in mid-cardiac arrest. (As a former journalist, I understand that reporters rarely if ever write their own headlines or choose their own images, but somebody at your media outlet needs to start educating those who make those decisions, so it might as well be YOU).

Just for fun, I Googled “having a heart attack” while drafting this article. Here’s but a small sample of the images that came up in my search, with pix of men vastly outnumbering those of women. This may help to explain why a Women’s Heart Alliance survey found that less than 45% of women recognize cardiovascular disease as the number 1 killer of women. 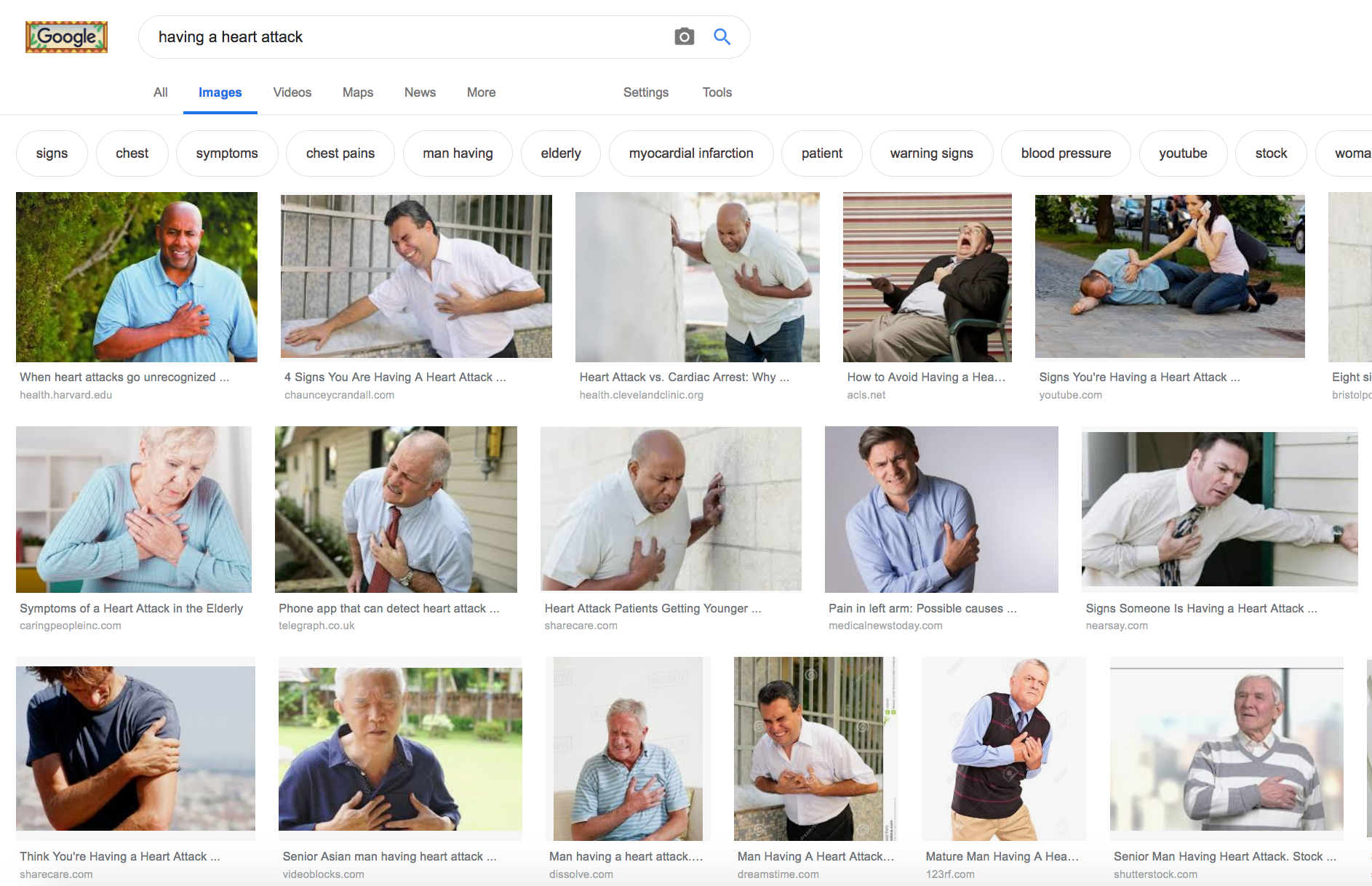 During my own heart attack, I could walk and talk and think and drive my car and go to work and fly to Ottawa over a number of days, all while suffering increasingly debilitating cardiac symptoms that came and went and came back again, continually. Researchers call this the “slow onset heart attack“.

I believed the Emergency physician who misdiagnosed me and sent me home despite my textbook Hollywood Heart Attack symptoms of central chest pain, nausea, sweating and pain radiating down my left arm. (“You are in the right demographic for acid reflux!”, he pronounced confidently).

And no wonder I believed him. After all:

“He is a very good doctor, and he does NOT like to be questioned.”

The question that I’d just had the temerity to ask the doc?

“But doctor, what about this pain down my left arm?”

I could not get out of that place fast enough!

I left feeling so horribly embarrassed because I’d just made a big fuss over “nothing” that, when my symptoms returned, there was no way I was going back to that hospital for help. That is, until my “acid reflux” symptoms finally became unbearable. That’s when I forced myself to return to Emergency – this time to a different doc and an appropriately correct cardiac diagnosis and immediate urgent treatment.

If somebody had taken a photo of me to illustrate what a heart attack looks like during the days leading up to that correct diagnosis, it may have shown me sitting at work with sweat dripping off my nose onto my desk blotter, popping Gaviscon like candies. No clutching my chest. No sliding off my chair, unconscious. No drama. Just feeling really, really dreadful.

At one of my recent Heart-Smart Women talks, one of the audience members asked me:

“What might you do differently if you had a chance to replay your first visit to Emergency?”

I told her that the most dangerous decision I made back then was deliberately choosing to ignore my worsening “acid reflux” symptoms.

So instead of standing up for myself, I meekly left the hospital that day feeling embarrassed, humiliated and clearly too stupid to know the difference between indigestion and heart attacks. But I also felt vaguely relieved that it wasn’t my heart, because I knew that my own symptoms didn’t feel like “that guy” (e.g. clutching my chest in agony and falling down).

I will never forget the heart attack survivor I met during my Mayo Clinic training who had also been misdiagnosed and sent home from Emergency. But unlike me, she kept going back to her local Emergency Department, despite being misdiagnosed each time. During her return trips, she insistently told the staff: “I know my body! SOMETHING is wrong with me!” At her third desperate trip back, she was advised to consider taking anti-anxiety drugs. At her fourth visit, she underwent emergency double bypass heart surgery.

Even the name of my particular type of heart attack still has a male name: the widowmaker heart attack. They don’t, for example, call it the “widowermaker” when women like me survive this.

Isn’t it about time we stopped giving it a male face, too?

Q:  Would you prefer to see fewer pix of men in agony out there to illustrate women’s heart attacks?

NOTE FROM CAROLYN: I wrote much more about cardiac symptoms (all kinds!) in Chapter 1 of my book, “A Woman’s Guide to Living with Heart Disease”. You can ask for it at your local bookshop, or order it online (paperback, hardcover or e-book) at Amazon, or order it directly from my publisher, Johns Hopkins University Press (use the JHUP code HTWN to save 20% off the list price).

Is sudden cardiac arrest the same thing as a heart attack?
When heart attack symptoms disappear – and then return

Slow-onset heart attack: the trickster that fools us

Finally. An official scientific statement on heart attacks in women

How can we get female heart patients past ER gatekeepers?

How does it really feel to have a heart attack? Women survivors answer that question.