May, as you may recall, was National Mediterranean Diet Month, celebrated at our house with a helpful Oldways calendar posted on the fridge with 31 daily suggestions on how to introduce more heart-healthy Med Month changes into our regular routine. As promised, here’s how I did:

First, here’s the simple calendar poster I put up for the month of May to remind me to make every day Mediterranean. 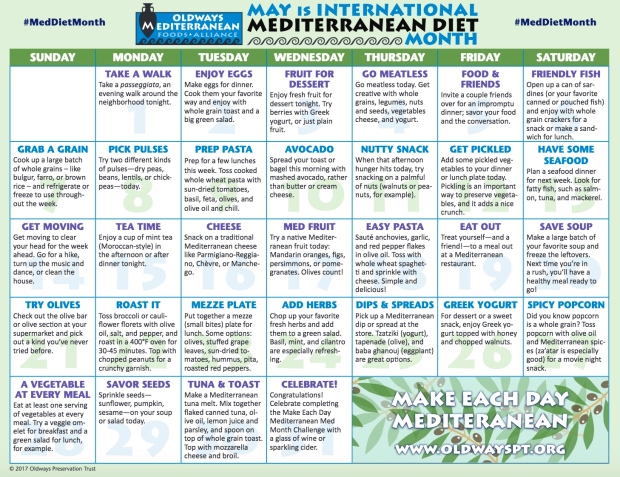 Day One was fabulous! The calendar tip for May 1st was this:

“Take a passeggiata, an evening walk around the neighbourhood tonight.”

What a lovely cosmopolitan thing to do on a beautiful evening! The air outdoors was still, the long shadows cast on front lawns by the setting sun were picturesque, and the nearby streets quiet aside from the occasional lawn sprinkler or the sounds of older kids playing road hockey. This Mediterranean way of life feels great so far!

Day Two: Enjoy eggs for dinner, along with whole grain toast and a big green salad. For this day’s assignment, I make a beautiful omelette for dinner. Some people living with heart disease, by the way, may still incorrectly believe that cholesterol-loaded eggs (specifically the yolks) are off-limits, but as Cleveland Clinic experts now tell us, dietary cholesterol in food is rarely the culprit that ends up inside coronary arteries (unless you are also diagnosed with diabetes).  A local cardiologist once told me that when early cholesterol studies were first emerging in the 70s, heart patients were sternly warned: ‘No more eggs, ever!’ (hence the introduction in 1972, by the way, of the grocery product called Egg Beaters (egg whites plus a whack of thickeners, synthetic vitamins, processed sugar and other chemicals inside a pourable carton, marketed to people who have been frightened by the word cholesterol). As more advanced studies emerged, however, this doctor’s advice morphed to: ‘Two eggs per week won’t kill you!’ – until now, when he suggests having one egg a day is perfectly acceptable.  Even better, try tracking down a local farmer who sells eggs. (See also: Eggs: Good or Bad for Your Heart?)

For my omelette, I throw in almost every veggie in the fridge – like swiss chard, spinach, peppers, broccoli, zucchini and caramelized onions. (I whip up the latter in big batches: 3-5 pounds of coarsely chopped peeled cooking onions at a time, mixed with a little olive oil and lots of minced garlic, 24 hours in the slow cooker – yes, 24! – and then frozen in individual muffin tins for small-sized portions as needed).

Day Three: Fruit for dessert. Another terrific one, because fruit is so delicious. A simple salad of chopped apples, bananas and oranges is both colourful and easy to make.

Day Four: Go Meatless. So far, the Med Life feels a lot like normal life around here. For May 4th, I make spicy black bean veggie burgers (I like the Sol brand, available throughout Canada and the U.S.*) dressed with lettuce, tomatoes, pickles, hot peppers, mustard, grated cheddar and more of those caramelized onions – so good, I don’t even miss the beef.

When it came to planning what to eat each day during Med Month, the challenge was not too hard – even when trying foods we weren’t very familiar with. On Day 17 (Try a native Mediterranean fruit), my family has fun figuring out the best way to open up a pomegranate (a 2-minute YouTube video provides the most creative solution!)  On Day 22, roasted cauliflower sprinkled with crunchy peanuts is a terrific side dish. And on Day 31, a glass of wine helps to celebrate the end of Med Diet month.

There were only a handful of Med month challenges that made me hesitate. Day 18, for example, suggests Easy Pasta tossed with sautéed anchovies, red pepper and garlic in olive oil. Anchovies?! I just can’t do it. . .

A couple of the daily suggestions struck me as game-changers. Imagine making Day 28’s A Vegetable at Every Meal suggestion a part of everyday life, day after day. As a person who grew up in a big Ukrainian family where we considered dill pickles to be a vegetable course, this one idea alone really caught my attention. I’m not big on veggies. If somebody serves me carrots at a dinner party, I’ll eat them politely, but I could quite happily go for days without even thinking about eating a carrot. So I had fun figuring out ways to add a veggie to every single meal, including breakfast each morning (in scrambled eggs or green smoothies, for example).

As on Day One, I really liked the inclusion of non-food suggestions we could add to live the Med Life. Invite friends over for an impromptu dinner, for example (Day 5) or get moving (Day 14) remind us that part of the reason the Mediterranean Diet is so good for us is that it’s not only about food. It includes getting plenty of physical exercise, and having meals with family and friends.

According to Mayo Clinic, the Mediterranean diet also emphasizes:

The Mediterranean Diet isn’t a fad diet, or even a diet at all. Even typing the word diet here feels odd to me. I’ve been on a diet since I was 13 (when I was a skinny bone-rack, by the way, but was convinced by two of my first-year Mexico City dorm mates at Mt. Mary Immaculate Academy that all of us Canadian girls were gorda and needed to go on a diet!) I’ve been a Lifetime Member of Weight Watchers since 1977. Like many women, I’ve tried every diet fad, and have lost and gained back the same 20 pounds, over and over, for decades. I now believe, however, that diets just don’t work in the long run.

But the Mediterranean Diet isn’t like any “diet” I’ve been on. It’s more like a culture of enjoying life and food. And it’s a way of life that’s been shown to benefit heart patients. These benefits have been proven in many studies (see this list of just some of the published scientific research).

For example, in 25 years of follow-up during the landmark Seven Countries Study, eating food based on the dietary traditions of Crete, Greece and southern Italy was associated with reduced risk of coronary heart disease compared to northern European countries/the United States.(1) And scientists in Greece and Italy completed a meta-analysis of studies on more than half a million people diagnosed with Metabolic Syndrome, a specific combination of medical issues that puts us at higher risk for heart disease.(2)  Metabolic Syndrome is considered to be present if someone has three or more of the following risk factors:

The researchers found that the Med Diet improved all ﬁve risk factors and overall reduced the risk of Metabolic Syndrome, which in turn helps to reduce the associated risk of heart disease.(2)

Give Med Living a try yourself for a month, and let me know your take on it!

Q: What’s your experience been like while living the Mediterranean Life?

* NOTE FROM CAROLYN: mentioning Sol veggie burgers does not in any way imply corporate endorsement or receipt of any favours/cash for saying that I like them!

4 thoughts on “Report card: my month of eating Mediterranean”