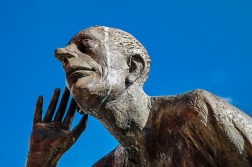 A woman in one of my Heart-Smart Women presentation audiences told me about a conversation she overheard in our local Emergency Department, in which the physician said to the (male) patient in the bed next to hers:

“All of your cardiac tests came back ‘normal’, but we’re going to admit you for observation just to make sure it isn’t your heart.”

That story tells us that (unlike your average woman – i.e. me! – with cardiac symptoms alarming enough to propel her to seek emergency care, but unlucky enough to have tests that look “normal”), a man who shows up with both cardiac symptoms and “normal” test results does not need to fight to be believed.

That story is about yet another man being routinely admitted for observation (as current cardiovascular care treatment protocol recommends). It’s also about a man who, when he tells Emergency personnel he’s worried that his alarming symptoms might be a heart attack, he fully expects that they will believe him.

On the other hand, we know (as described here, here and here, for example) that once a woman with cardiac symptoms produces “normal”-looking cardiac diagnostic test results, most physicians will immediately move on to suggest a non-cardiac reason for her complaint. Misdiagnosis options can include anxiety, stress, depression, indigestion, pulled muscle, attention-seeking, asthma, thyroid or gall bladder problems, and of course the very popular catch-all misdiagnosis of menopause.

When I was sent home with an acid reflux misdiagnosis (coincidentally from the same Emergency Department where my audience member had overheard that male patient being admitted), I did not realize at the time that my experience of having my “Hollywood heart attack” symptoms dismissed was not at all uncommon for female heart patients.   See also: The Heart and Stroke Foundation’s report, Women’s Hearts are Victims of a Broken System That is Ill-Equipped to Diagnose, Treat and Support Them

And if I could be misdiagnosed despite textbook cardiac symptoms like central chest pain, nausea, sweating and pain down my left arm because my initial tests came back “normal”, what hope can there be for women presenting with vague cardiac symptoms along with “normal”-looking diagnostic tests?

As Maya Dusenbery explained in a USA Today article last year called Why Women Struggle to Get Doctors to Believe Them:

“This tendency to brush off women’s symptoms is rooted in the colloquial sense of hysteria today, in terms of seeing women as more emotional and dramatic. But women aren’t being treated as hysterical in the modern meaning, but hysterical in the old meaning of hysteria – as this disease that became understood as a psychogenic illness.

“I was surprised by how much silence around these dismissive experiences there often is. Women either internalize that dismissal or, even if they recognize it as problematic and push back individually, attribute it to just bad luck or they think they could have done something better to advocate for themselves.

“I hope that the medical providers see that this problem is more widespread than we realize.”

Dusenbery is the author of the highly recommended book called “Doing Harm: The Truth About How Bad Medicine and Lazy Science Leave Women Dismissed, Misdiagnosed, and Sick“. She  suggests that we are starting to see younger female patients speaking up about these kinds of dismissive experiences, adding:

“It’s often very shocking and surprising for women, at least women who have a degree of privilege or have been raised with the expectation that their accounts of the world – let alone their own bodies – will be trusted.

Jennifer Brea is one of those young women who likely shared that expectation that, when her alarming physical symptoms worsened over the course of a year, she would of course be believed by the medical professionals she sought out for help.

She is the creator of the documentary film Unrest, about her own medical condition, generically described as chronic fatigue syndrome/myalgic encephalomyelitis (ME for short). There is no test, there is no cure, and it mostly affects women.

Brea once told an Inflection Point radio interviewer that, when she first sought treatment for her distressing symptoms, “doctors would run a wide range of tests and do investigations. And then when they couldn’t find anything, it always turned back to, ‘Well, maybe you’re just really stressed. Maybe you are depressed. Maybe there’s nothing wrong at all. Maybe this is all in your head.’

“I started to suspect as I was trying to get a diagnosis that I was being taken less seriously because I was young and female.

“There was a strong expectation that because of my youth, I was supposed to be well, and nothing could be wrong. But that also because of my youth and my gender, that I was just more prone to be kind of anxious and worry about my body and what I was feeling.

“And I think there’s just this sort of unspoken expectation that women are more fragile and more achy, more whatever.”

More “whatever”?!  Why would Jennifer Brea’s physicians be more likely to dismiss her alarming symptoms than to believe her?

To help me understand why this might be happening, I looked to Dr. Danielle Ofri, author of What Patients Say, What Doctors Hear, in which she explained what she called the “internal bias“ that she suspects may be behind this failure to believe women.

Patients can experience a physician’s internal bias, as Dr. Ofri suggests, when physicians don’t take their complaints seriously. Doctors may fail to see them as individuals. And doctors aren’t immune to their own internal biases, and may make assumptions about their patients.

She even admits that she sometimes does this herself, as she told a Globe and Mail interviewer:
.

”  When a patient is known for being a complainer, I may mentally downgrade what that patient has to say, dismiss it as just another complaint, and think that there’s nothing really wrong.
‘.
“And of course, that’s a terrible thing to do because people who have lots of complaints also have real illness too, and you can miss something.”

Is there a solution to this scenario of having one’s medical issues “mentally downgraded”?

Internal biases are so deeply rooted that they can be difficult for healthcare professionals to overcome, Dr. Ofri says.

But it might help for doctors to pause and consider what it’s like to be the patient when they find themselves making flash judgments or thinking, “Oh, no! There’s that patient.”

A tactic Dr. Ofri now recommends to her colleagues it this one:

”    Imagine it’s your grandparent who doesn’t speak the language, or who doesn’t have that much education and is struggling to find the right words.”

Patients can also do something.

Dr. Ofri suggests that patients can clearly point out when they feel their doctors are making assumptions about them:

“It’s okay to stop [your doctor] and say, ‘Hey, I’m not sure you’re really hearing what I’m saying,’ or, ‘I feel like you’re jumping to conclusions about what I’m saying before I’ve had a chance to explain.’ “

Q:  Have you had the experience of not being believed during a serious medical crisis?

NOTE FROM CAROLYN: I wrote much more about being believed – or not – in my book “A Woman’s Guide to Living with Heart Disease“ (Johns Hopkins University Press, 2017). You can ask for this book at your local bookshop, or order it online (paperback, hardcover or e-book) at Amazon, or order it directly from Johns Hopkins University Press (use their code HTWN to save 20% off the list price).

Why doctors must stop saying: “We are all patients”– my guest post in the British Medical Journal (BMJ)

Unconscious bias: why women don’t get the same care men do

When your “significant EKG changes” are missed

The ’18 Second Rule’: why your doctor missed your heart disease diagnosis