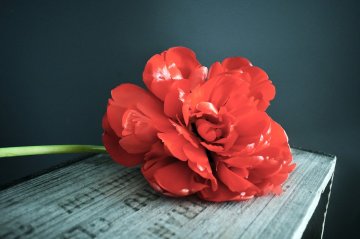 His body was found in his favourite chair, facing the TV that was still on (most likely, watching hockey). He’d been a lifelong Toronto Maple Leafs fan despite the team’s disappointing inability to win the Stanley Cup each year since 1967; even his obituary included his long-suffering lament:

END_OF_DOCUMENT_TOKEN_TO_BE_REPLACED

In response to last week’s blog post about cortisol (which featured Dr. Doreen Rabi’s surprising explanation of how this stress hormone rises among heart attack patients AFTER hospital discharge), Jan Oldenburg sent me a note. Her note simply said:

As Christopher Buckley wrote in his memoir, Losing Mum and Pup, when the last of your parents dies, you are an orphan. This is poignantly true if that parent is your mother.

“You lose the true keeper of your memories, your triumphs, your losses. Your mother is a scrapbook for all your enthusiasms. She is the one who validates and the one who shames, and when she’s gone, you are alone in a terrible way.”    ..

END_OF_DOCUMENT_TOKEN_TO_BE_REPLACED

I’ve heard it said that some people experience a loss of appetite during stressful times like a death in the family.  These people are not my relatives. Indeed, in our Ukrainian family tradition, we eat when we’re happy, we eat when we’re upset, and we eat during all possible emotions in between.

Every family gathering surrounding my mother’s death was no exception.

For example, the delicious lunch following her funeral service was a true labour of love prepared by the women of my mother’s church, just as the women of churches, mosques, temples, synagogues and neighbourhoods around the world have been doing for mourners since time began. END_OF_DOCUMENT_TOKEN_TO_BE_REPLACED

My Dad died young in 1983, at just 62 years of age. His was the first significantly meaningful death I’d ever been exposed to, and my personal introduction to the concept of grief and bereavement in our family. My father died of metastatic cancer, lying in a general med-surg hospital ward bed, misdiagnosed with pneumonia until five days before his death, cared for (and I use those two words charitably) by a physician who was so profoundly ignorant about end-of-life care that he actually said these words to my distraught mother, with a straight face:

“We are reluctant to give him opioids for pain because they are addictive.”

This pronouncement was made on the morning of the same day my father died. But hey! – at least Dad wasn’t an addict when he took his last breath nine hours later.    END_OF_DOCUMENT_TOKEN_TO_BE_REPLACED

My cat Lily died in my arms last Monday evening. We were sitting around watching the hockey playoffs on TV, Lily curled up in her little wicker bed on the floor beside me. Suddenly, I heard an unusual, low-pitched “meeeooow” like I’d never heard before, a small cough, two deep sighs, and then nothing. The vet believes that “her heart just gave out” due to hypertrophic cardiomyopathy, the most common form of heart disease in cats. Sometimes there are no signs and sudden death is the first, and last, hint of any problem. That trip to the vet was a blur. My daughter Larissa (that’s her on the left showing off Lily’s frog costume last Halloween) and my son-in-law Randy were right there with me.

Later, after a weepy final visit with my Lily in the vet’s office, we were back at home over rhubarb crisp and tea, and they quietly removed Lily’s toys, food  and assorted cat stuff so I wouldn’t have to deal with them the next morning.

Let me tell you a little about my Lily. After my heart attack, I found out that owning a pet happens to be very good for heart patients.  In fact, being a cat owner could actually reduce your risk of another heart attack by nearly one-third, according to a 10-year study by researchers at the University of Minnesota’s Stroke Institute. And even having a purring cat on your lap can lower your blood pressure.

So off we headed to the local animal shelter, where we adopted the world’s cutest cat.  END_OF_DOCUMENT_TOKEN_TO_BE_REPLACED