I was feeling dead chuffed (as my UK friends would say) to be published again in the British Medical Journal (BMJ) recently.(1)  As part of their What Your Patient Is Thinking series, my guest essay includes what I now wish I’d known before being sent home from the Cardiac Care Unit following my heart attack diagnosis and treatment.

END_OF_DOCUMENT_TOKEN_TO_BE_REPLACED 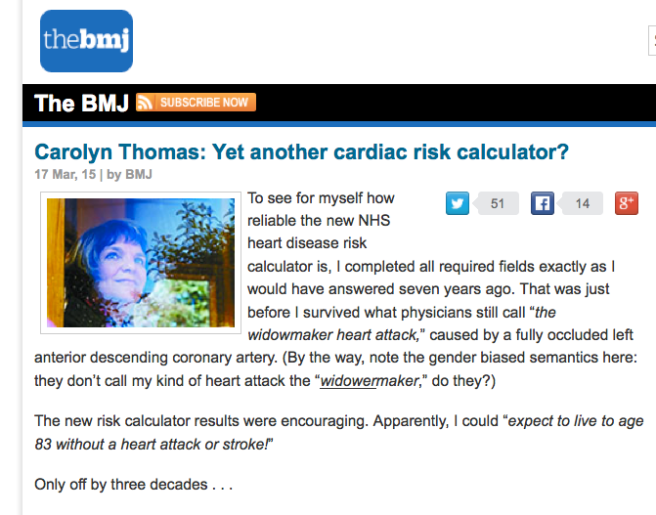 I was contacted by Juliet Dobson at the British Medical Journal recently, who asked me for a heart patient’s perspective on a new cardiovascular risk calculator.  It’s been launched by the U.K.’s National Health Service (NHS), and claims that it can tell you your real heart age. Here’s what I wrote . . .   END_OF_DOCUMENT_TOKEN_TO_BE_REPLACED

You already know that research papers submitted for publication in medical journals are first subject to peer review before a final decision to accept the paper is made. Peer review is a time-honoured way to evaluate scientific or academic papers by others working in the same field.  But The British Medical Journal, the world’s oldest, has launched a unique initiative to include patient review of submitted studies as well. Here’s how BMJ explains this project:
END_OF_DOCUMENT_TOKEN_TO_BE_REPLACED

Allow me to share with you this thrilling sight, dear heart sisters!  It’s the Twitter page of the British Medical Journal (BMJ) plus its Tweet about my BMJ blog post called Why Physicians Must Stop Saying: “We Are All Patients“ that was published today.

A big “thank you” for this goes to Dave de Bronkart (some of you know him better as ePatient Dave). Dave is a sneaky sort of guy who, unbeknownst to me, sent the BMJ editors a link to my recent Heart Sisters post called “We Are All Patients.” No, You’re Not. The editors then contacted me to ask if I’d also write something for them, and here we are!

When Edward Davies was with the British Medical Journal, he attended the Lown Institute conference in Boston, where he was reminded of some unlikely wisdom from boxer Mike Tyson. In the run up to a big fight, he explained, Iron Mike was being bombarded with media questions about how he intended to deal with his powerful challenger. Did he have a strategy?  What was his plan? The boxer’s response was simple:

“Everybody has plans ‘til they get punched in the mouth.”

In boxing terms, as Davies wrote in the BMJ, this is completely literal sound advice, but as a figurative metaphor for life, it’s not bad, either:

“Listening to a patient panel here at the Lown Institute conference, I was reminded that this is a worldview that doctors might do well to remember.”

Most patients diagnosed with a life-altering diagnosis can readily identify with what that metaphorical punch in the mouth feels like.  END_OF_DOCUMENT_TOKEN_TO_BE_REPLACED