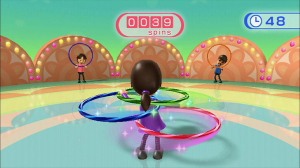 The first time I played Wii video/fitness games over at my daughter’s house was memorable.  We laughed nonstop while we were boxing, river rafting, hula-hooping and ski-jumping in her living room, and were both huffing, puffing and sweating after an hour with the Wii console. Have you tried it yet?

Next morning, my shoulders and arms (my main boxing muscles, I would guess) were so sore I could barely lift my coffee cup.  This was a sure sign that I’d been getting a great workout, while having heaps of fun.

The American Heart Association thinks it’s a great cardiac workout, too.  In fact, the AHA has entered into a “strategic relationship” with Nintendo to endorse its Wii video game system, saying that active-play video games like Wii can be part of a healthy lifestyle.  The Wii gaming console, the Wii Fit Plus, and the Wii Sports Resort will all carry the AHA’s seal of approval.

So what could be wrong with this new AHA endorsement on such a swell product? It was the TV show Good Morning America that first raised the alarm over the partnership.  END_OF_DOCUMENT_TOKEN_TO_BE_REPLACED

SPRING SALE!  Save 30% using the code HTRY when you order my book directly from Johns Hopkins University Press