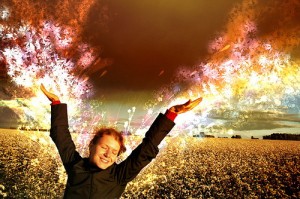 Good news, my heart sisters: a study published this week in the heart  journal Circulation reports that women with an optimistic outlook on life may live longer and be less likely to develop heart disease than their pessimistic counterparts.

But can you actually change from thinking like a pessimist if that’s your nature?  Dr. Martin Seligman, a University of Pennsylvania professor and author of one of my favourite books, Learned Optimism, says yes. He claims:

“You can learn to cultivate a more upbeat attitude, and it’s never too late to start. I’m a born pessimist myself, so I’ve had to learn techniques to help pull me out of the mire.”

Dr. Suzanne Segerstrom at the University of Kentucky agrees.  The author of Murphy’s Law: How Optimists Get What They Want From Life – and Pessimists Can, Too says that the first rule is: don’t work too hard at trying to become a happy optimist:

“It has to be a byproduct; it can’t be the goal itself.

She tells of  one study in which three groups of people were asked to listen to uplifting music like Stravinsky’s Rite of Spring:

The only people who actually felt better listening to the music were those who weren’t told to get happier or to monitor their feelings. Dr. Segerstrom explains:

Optimism is essential in the arsenal for happiness hunters, which Segerstrom defines as “the expectation of positive outcomes.” Most Americans, about 80 percent, are somewhat to very optimistic.
If you aren’t, you can, of course, blame your parents. Your level of optimism, Segerstrom says, is determined to the tune of about 25 percent by heredity. But, she says, that’s a lower hereditary factor than many other personality measures.
In other words, you aren’t stuck with that half-empty glass.
“You don’t have to change your inner being, you just have to do what (the optimistic) do,” Segerstrom says. “If you know that they are happier because they pursue their goals more persistently, you can make a resolution to try one more time when you feel like giving up.”

“You don’t have to change your inner being – you just have to do what optimists do. If you know that they are happier because they pursue their goals more persistently, you can make a resolution to try one more time when you feel like giving up.”

Some people, especially women who have had heart attacks, might argue that of course they are pessimists, given their tragic diagnosis of such a chronic and progressive disease. And if you’re living with debilitating symptoms and a diminished quality of life, it can be challenging to avoid that seductive urge to wallow with gusto. An optimistic outlook doesn’t mean pasting on a happy face and pretending you don’t have what you have, but trying to both create and observe the small moments every day that do help to make you feel better.

Toni Bernhard, author of How To Be Sick, is a notable example of such a patient. Although bedridden for the past decade by severe symptoms, her writing and photography continues to inspire those around her.

And one of the biggest surprises in current research, according to UC Riverside’s Dr. Sonja Lyubomirsky, is that what happens to you actually doesn’t matter as much as you might expect.

“Life events don’t have much of an impact on optimism or happiness.”

Rather than life events shaping outlook, it seems outlook may shape life events. She adds:

“When you have a positive mood, lots of positive things happen to you.”

That’s exactly what Dr. Seligman means when he writes:

“When something bad happens to a pessimist, she’s likely to get into a sort of dark and hopeless mental muttering that has her thinking things like: ‘Why me? Ain’t if awful? It’s permanant and everything is ruined and it’s all their fault.’

“The optimist’s explanation? ‘It was bad luck. I’ll be able to handle it. I learn from my experiences.’

“With this kind of reasoning, an optimist feels a greater sense of control over her future – and her health.”

To help that positive mood along, here are some tips for  you natural born pessimists from Drs. Lyubomirsky and Segerstrom:

Note to born pessimists: Trying to just ignore your worries may not work, according to pessimism researcher Dr. Julie Norem. For you, she suggests trying to rein in your anxiety by coming up with concrete, active ways to head off negative outcomes for specific endeavors.

Read more about the heart health benefits of being optimistic reported in Circulation.