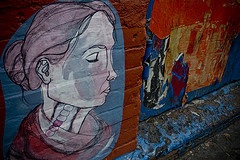 I have a friend who has a friend who’s been depressed, off and on, for years. During that time, my friend and I have done our fair share of eye-rolling whenever the subject of this person’s depression came up. We wondered why she just couldn’t pull up her socks and quit all this self-absorbed moping around.

Neither my friend nor I had ever had one nanosecond of actually experiencing clinical depression ourselves – which, of course, didn’t stop us from passing judgement.

Fast forward several years to the weeks and months following my heart attack.

I knew something was terribly wrong with me. I couldn’t seem to concentrate, couldn’t make even the simplest of decisions, couldn’t stop weeping over nothing, and, most distressing for an extroverted optimist, I was unable to find any pleasure in the many things that I used to enjoy.

It’s not that I felt sad (although I often did) but more that I just didn’t care. I wanted to pull the covers over my head and hide all day long.  I slept in my clothes. I forgot about clean hair or basic hygiene. I just didn’t care how I looked or how I smelled. At first, I did try valiantly to paste on a little happy face for family and friends, but that soon became so exhausting that it seemed easier to just stop being around others entirely.

I didn’t know it at the time, but I was getting a firsthand remedial course in correcting those misconceptions about depression.  The situational depression that so often accompanies a cardiac diagnosis is a dangerous condition if you’re a heart patient, because we know that depressed people are far less likely to take their cardiac meds as directed, exercise, eat healthy, quit smoking, show up for cardiac rehabilitation classes, or follow basic medical recommendations.

Check this list of myths and facts to test your own awareness:

MYTH: Depression is hurtful, but not a major medical condition.

FACT: Depression isn’t simply a temporary case of “the blues.” It’s a common, serious medical condition that can disrupt one’s daily functioning. At the extreme, people with depression may harm themselves. Brain imaging research shows that the brains of people with depression function differently than those of non-depressed people. In depressed people, brain areas that regulate mood, behaviour, thinking, appetite and sleep seem to function abnormally. Also, important brain chemicals called neurotransmitters appear to be out of balance.

FACT: Depression affects people from all walks of life, not just people with previous emotional troubles. Depression can strike after the loss of a loved one, trauma, a catastrophic medical event like heart attack or stroke, and other stressful situations. Some estimates reveal that the majority of women will suffer situational depression following a cardiac diagnosis.

MYTH:  Being optimistic can cure depression.

FACT:  Depression is debilitating. Most people with the disorder will require help to get better. Few can will themselves to get well through positive thinking (despite the questionable advice from one psychologist I saw (briefly!) to “sign up for an interesting university class” to cure my depression). Some depressed people may also need medication to help normalize brain chemicals.

FACT: Fewer than 40% of people with depression see a mental health professional.  Even though up to 65% of heart attack survivors develop some degree of depression (this compares with an estimated 10-20% of those with a terminal cancer diagnosis, by the way) we know that –  alarmingly! – fewer than 10% of these are appropriately identified. Many depressed patients remain undiagnosed or undertreated. Some cases are tough to treat, but the vast majority of cases are highly treatable with appropriate counselling therapy or meds. The earlier treatment begins, the more effective it is. See also: 10 Non-Drug Ways to Treat Depression in Heart Patients

MYTH:  Depression is most common in elderly people.

FACT:   In fact, middle-aged people 40 to 59 have the highest rates of depression. Depression is not a normal part of aging. However, ill health, medication side effects, social isolation, and financial troubles can trigger depression in the elderly, who belong to a generation that often feels ashamed to admit to feelings of weakness, sadness or grief. But it’s crucial to seek help, no matter the age.

MYTH:  Talking about depression only makes it worse.

FACT:  Different types of psychotherapy, or talk therapy, have been proven effective in treating depression. For example, cognitive behavioral therapy teaches people different or new ways of thinking to replace negative thoughts and behaviours that may contribute to depression.

And here are even more disturbing facts about depression in general. We know that women are twice as likely to develop depression compared to their male counterparts.

This higher overall risk, according to Dr. Nasreen Khatri of Toronto’s Baycrest Hospital, is likely due to a combination of factors, including:

Dr. Khatri adds that many middle-aged women today are also caring for both their own children and elderly parents, thus increasing stress levels which in turn can lead to depression.

And depression itself appears to make women two times as susceptible to Alzheimer’s disease, for reasons that are not yet entirely clear. What may not be well known is that seven out of 10 new cases are women, ironically, explains Dr. Khatri, the very people who more often than not take on the major responsibility for caring for dementia sufferers.

When the former Globe and Mail reporter Jan Wong wrote about her own journey with debilitating depression in the book Out of the Blue, she described the life lessons that depression had taught her:

“The big life lessons are that you can have clinical depression and you can get over it. It’s completely treatable. It has an end.

“Second life lesson: you’ll probably be stronger when you come out of it than you were before.

“The third life lesson is you’ll probably be happier because you leave it behind and you will find a new life.

“The fourth lesson: that family matters. Everything else is extra.”

Q: Have you experienced depression following a cardiac event?

NOTE FROM CAROLYN: I wrote much more about depression and heart patients in my new book, “A Woman’s Guide to Living with Heart Disease“ (Johns Hopkins University Press, November 2017).

12 thoughts on “Depressed? Who, me? Myths and facts about depression after a heart attack”