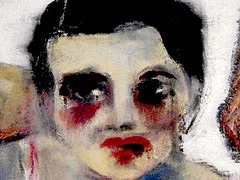 North Carolina psychotherapist Kristen McClure has this to say about physical symptoms of depression in women:

“This is one of the signs of depression in women that is not well studied or understood. Our body and our mind are really not separate. When we are depressed or anxious, our body may get physically ill, and may ache or hurt in ways that we can’t quite explain.

“It is not surprising that efforts to work on this division between mind and body such as meditation, physical exercise and yoga are now components of effective treatment for depression.”

She adds that, just as depression can manifest in physical symptoms, physical exercise has been shown to be surprisingly helpful for those diagnosed with depression.

“One of the most compelling studies done by Blumenthal* of Duke University Medical Center randomly assigned women to take medicine or exercise as treatment for mild to moderate depression, and found almost equal positive results.

“This means that women on antidepressants and women who exercised experienced equal relief from their symptoms.”

Here are some other suggestions for getting through depression:

According to the Canadian Mental Health Association, depressive illness can change the way a person thinks and behaves, and how the body functions. Get help if the following symptoms are severe, last for several weeks, and begin to interfere with your work, family and/or social life:

And here are even more disturbing facts about depression. We know that women in general are twice as likely to develop depression compared to their male counterparts.

When the former Globe and Mail reporter Jan Wong wrote about her own journey with debilitating depression in the memoir Out of the Blue, she described the life lessons that depression had taught her:

“The big life lessons are that you can have clinical depression and you can get over it. It’s completely treatable. It has an end. Second life lesson: you’ll probably be stronger when you come out of it than you were before. The third life lesson is you’ll probably be happier because you leave it behind and you will find a new life. The fourth lesson: that family matters. Everything else is extra.”

Women’s higher overall risk for depression, according to Dr. Nasreen Khatri of Toronto’s Baycrest Hospital, is likely due to a combination of factors, including:

Dr. Khatri adds that many middle-aged women today are also working full-time while caring for both their own children and elderly parents, thus increasing stress levels which in turn can lead to depression.

And depression itself appears to make women two times as susceptible to later developing Alzheimer’s disease, for reasons that are not yet entirely clear. What may not be well known is that seven out of 10 new cases are women, ironically, explains Dr. Khatri, the very people who more often than not take on the major responsibility for caring for dementia sufferers.

4 thoughts on “How that ache may signal depression”