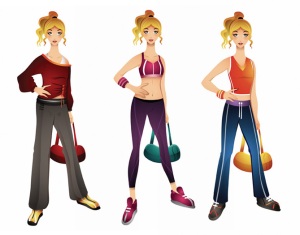 On any given day, women are vastly outnumbered by men at cardiac rehabilitation – when they show up at all. Female heart patients who do attend while recovering from a cardiac event often say they don’t like working out in the cardiac rehab gym alongside so many men – in fact, there’s usually a one-to-five ratio of women to men. To address this concern and attract more women heart attack survivors, some programs are now offering female-only cardiac rehab sessions.

This is a good thing, as we know that a cardiac rehab program can help survivors improve their physical fitness, learn about nutrition, meet other heart patients, and get support to quit smoking, lose weight or make other heart-healthy lifestyle changes to improve heart health. In fact, completing a course of cardiac rehabilitation can result in a 26%-40% reduction in cardiac mortality over the following five years.

But those improved odds are only possible if physicians actually refer their heart patients to rehab.

Yet referral rates remain shockingly low – it’s estimated that only 20% of all eligible patients are referred by their physicians.  See also: Failure to refer: why are doctors ignoring cardiac rehab?

Depression is another factor that can keep us away from cardiac rehab.

Depression often follows a heart disease diagnosis (Mayo Clinic cardiologists tell us that up to 65% of survivors suffer depression, yet fewer than 10% are appropriately diagnosed).  Depression is also in general twice as likely to affect women as men. Depression interferes with how well we can stick with important lifestyle modifications following a cardiac event,  as well as our willingness to even bother showing up for cardiac rehabilitation.

It turns out that a major benefit of attending and completing a cardiac rehab program after a heart attack is that symptoms of depression actually improved among women who participated in a motivationally-enhanced cardiac rehabilitation program exclusively for women, according to a presentation at November’s American Heart Association’s annual scientific meetings.

The study’s lead author Dr. Theresa Beckie, professor at the University of South Florida’s College of Nursing in Tampa, explained:

“Women don’t have the motivation to attend cardiac rehab if they become depressed. Historically women’s attendance in cardiac rehabilitation programs has been consistently poor over the last several decades.

“This poor attendance may be partly due to mismatches in stages of readiness for behaviour change, but with the rehab health professional approaching from an action-oriented perspective.  This is destined to evoke resistance.”

Cardiac rehabilitation programs that are tailored to the unique needs of women and to their current level of readiness to change may improve attendance at such programs, and potentially improve health outcomes for women, says Dr. Beckie.

Her team’s 5-year randomized clinical trial studied physiological and psychosocial outcomes of women who participated in a specially augmented 12-week cardiac rehab program that was:

Researchers then compared results with outcomes for women who attended a 12-week traditional mixed-gender cardiac rehabilitation program comprised of education and exercise.

Depression scores for women in the augmented women-only group dropped from 17.3 to 11.0 on the 20-item Center for Epidemiological Studies Depression Scale — “a significant decline compared to the traditional group,” explains Dr. Beckie:

“We found that improvements in depressive symptoms were sustained at the six-month follow-up in the augmented group, while those in traditional cardiac rehab were essentially unchanged. This augmented women-only intervention also led to significantly better attendance and completion rates than those in the traditional cardiac rehabilitation program.”

NOTE FROM CAROLYN:  I wrote much more about the immense benefits of cardiac rehabilitation in my book, A Woman’s Guide to Living with Heart Disease. You can ask for it at your local bookshop, or order it online (paperback, hardcover or e-book) at Amazon – or order it directly from my publisher, Johns Hopkins University Press (use the JHUP code HTWN to save 20% off the list price).

Failure to refer: why are doctors ignoring cardiac rehab?

Do we need to change the name of cardiac rehab?

Depressed? Who, me? Myths and facts about depression following a heart attack

Returning to Exercise (and Training) After Heart Surgery  (THE best and most comprehensive overview on this topic I’ve seen yet, written by cardiologist and triathlete Dr. Larry Creswell; especially useful for heart patients who have been regular exercisers before their cardiac event and are wondering how to safely resume their routine)