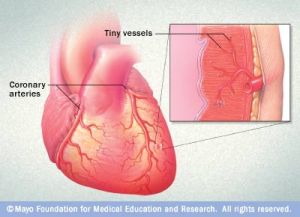 Turns out that the kind of heart attack that I had (caused by a 95% blockage in the big left anterior descending coronary artery) – the so-called widowmaker heart attack – may actually be relatively uncommon  in women. You might guess that fact by its nickname.  It’s not, after all, called the “widower-maker”.

While cardiologists warn that heart disease can’t be divided into male and female forms, there are some surprising differences. Cardiologist Dr. Amir Lerman at the world famous Mayo Clinic in Rochester, Minnesota, told the Los Angeles Times recently:

“When it comes to acute heart attacks and sudden death from cardiac arrest, women have these kinds of events much more often without any obstructions in their coronary arteries.”

Instead, it appears that a significant portion of women suffer from another form of heart disease altogether. It affects not the superhighway coronary arteries but rather the smaller arteries, called microvessels. These tiny arteries deliver blood directly to the heart muscle.

Ironically, I can now boast two diagnoses for the price of one – first, the widowmaker heart attack caused by a fully occluded coronary artery back in 2008, and then, after several months of puzzling, ongoing cardiac symptoms – like chest pain, shortness of breath, and crushing fatigue – a second diagnosis of inoperable coronary microvascular disease.

In 2006, research published in the journal Circulation looked at the Women’s Ischemia Syndrome Evaluation (WISE) study data on almost 1,000 women referred for cardiac testing due to their symptoms(1). Here’s what they found:

Dr. Noel Bairey Merz, a cardiologist at Cedars-Sinai Medical Center in Los Angeles, headed up the WISE study, which began in 1996. The average age of her participants was 58, but a quarter were younger and pre-menopausal.

Researchers found that what’s known as ischemic heart disease (any decreased blood flow and oxygen to the heart muscle) is often caused by a blockage within one or more coronary arteries that are feeding the heart muscle, but can also be due to at least two other possibilities:

They used a test in which doctors first measured blood flow through the heart and then injected a drug that should have made the arteries dilate and increased the flow. If the flow did not rise, the patient most likely had microvascular disease.

One third of the women in the L.A. study had low blood flow to the heart muscle caused by coronary microvascular disease.  For these women, the rate of deaths or heart attacks was higher than would be expected for other women with normal angiograms.

According to the Texas Heart Institute, coronary microvascular disease most likely happens when small blood vessels in the heart tighten or constrict. This tightening reduces the blood flow to the heart muscle and causes the pain of angina pectoris (a Latin phrase that means “strangling in the chest“).

The encouraging news at first:  because these vessels are so tiny, early research suggested that they may not increase the risk of a heart attack or death. But the Journal of the American Medical Association reported in 2005 that the prognosis of patients with unstable angina and non-obstructive coronary artery disease is not benign and includes a 2% risk of death or heart attack at 30 days of follow-up(2).  (JAMA. 2005;293(4):477-484. doi: 10.1001/jama.293.4.477)

Problematically, coronary microvascular arteries are too small to detect with the standard cardiac tests that cardiologists would normally use to see larger vessels, so women in particular are often dismissed and sent home with a misdiagnosis in spite of severe and distressing cardiac symptoms.

But in patients with coronary microvascular disease, these test results are normal – even though symptoms may be as debilitating as those experienced during a heart attack.

Dr. Noel Bairey Merz adds that angiograms that would clearly spot blockages in major heart arteries can miss coronary microvascular disease altogether. As a result, many women who have gone to their doctors with chest pain have gone home with a clean bill of heath – and most likely feeling very embarrassed for having made a fuss over nothing.  She says:

“Historically, women have been told that it was in their head.”

According to the Harvard Heart Letter, the preferred diagnostic tool for correctly identifying coronary microvascular disease is coronary reactivity testing.

“Coronary reactivity testing is an angiogram-like test lasting 60 to 90 minutes; it allows doctors to see how very small vessels supplying the heart respond to different ‘challenges’ from medications. “

Texas Heart Institute experts tell us that up until recently, the only treatment for coronary microvascular disease (also sometimes known as Cardiac Syndrome X, a name that’s generally hated by those of us diagnosed with MVD because of its implication that this disorder somehow doesn’t exist!) has been with these medications:

Physical exercise has also been shown to be helpful in managing MVD symptoms. A Swedish study reported in the Journal of the American College of Cardiology in 2000 suggested that being out-of-shape is a “prominent feature” in patients diagnosed with  MVD. Researchers found that a 30-minute workout on an exercise bike three times a week resulted in increased exercise capacity with lesser chest pain for the MVD patients they studied.

As more physicians become educated about the widespread incidence of coronary microvascular disease, particularly in women patients, more treatments are becoming available, including my own particular current treatment for microvascular disease: wearing a portable TENS machine all day long to help increase blood flow to the heart muscle and thus reduce chest pain symptoms. Read more on this underused, non-drug, non-invasive cardiac treatment in “My Love-Hate Relationship With My Little Black Box”.

“Neuromodulation owes its origins to Melzack and Wall’s gate theory of pain that predicted that stimulation of vibratory afferent nerves would reduce or gate the transmission of pain traffic relaying through the spinal cord at the same point.

“Transcutaneous electrical nerve stimulation (TENS) was specifically designed to make use of this predicted effect and was used to treat a variety of pain conditions before it was shown to be effective in angina.

“TENS neuromodulation should be offered as part of a multidisciplinary angina management programme based on the current guidelines.“

Another example of non-obstructive heart disease often seen in women is called Prinzmetal’s Variant Angina, chest pain caused by a spasm of a coronary artery. While Prinzmetal’s is not thought to cause a heart attack, chances of a cardiac event are higher in those with underlying heart conditions.

We don’t yet know exactly what causes coronary spasms like Prinzmetal’s.

One theory lies within the thin lining of the blood vessels called the endothelium. Usually this artery lining produces a chemical (nitric oxide) that helps to widen the blood vessel, allowing blood to flow through with ease.

But if the artery lining is damaged or isn’t working properly, the blood vessel may narrow and cause a coronary spasm. Levels of the artery-widening chemical are higher when estrogen levels are also high at certain stages of the menstrual cycle. A 2001 study published in the journal, Annals of Internal Medicine, suggested that during times when estrogen levels are high, women have fewer chest pain symptoms(3). In addition, smokers tend to have lower levels of nitric oxide in their blood vessels than non-smokers, and smoking is a major risk factor for coronary spasm.

Both men and women have three main coronary arteries surrounding their hearts. These are the large blood vessels that wrap around the outside of the heart, supplying blood, oxygen and nutrients to heart muscle to keep each heart pumping properly – and thus the arteries most susceptible to life-threatening cardiac events through obstructive – or non-obstructive – heart conditions.

But women who have a heart attack fare worse right after the event and also suffer a poorer quality of life.

NOTE from CAROLYN: Please do NOT leave a comment here describing your current symptoms. I’m not a physician and cannot diagnose you online (nor can anybody else). If you are experiencing distressing symptoms, seek a medical opinion from your physician.