When I was a little girl in the 1950s, my parents were stingy with praise and magnanimous with criticism. To be otherwise would result in a child developing a “swelled head”, which, as all parents knew back then, would be the worst possible thing that could ever happen to any child.

“She really thinks she’s SOMEBODY!” was a phrase delivered with withering contempt by my mother in describing any person whose sense of self-esteem seemed even remotely healthy.

Nobody, according to my parents, likes a kid with a swelled head. The only way to prevent that catastrophe was to be tough on your children, and in turn teach them to be equally tough on themselves. You could thus help them avoid growing up to be spoiled and self-indulgent adults who acted like they were “SOMEBODY!”

But Dr. Kristin Neff, who teaches at the University of Texas at Austin, now believes that children who grow up like this end up experiencing little self-compassion when life’s difficulties hit them. Her book Self-Compassion: The Proven Power of Being Kind to Yourself will  sound reassuring to those of us living with a heart disease diagnosis.

She maintains, for example, that self-compassion entails being warm and understanding toward ourselves when we are suffering, rather than ignoring our pain or flagellating ourselves with self-criticism.  She told the New York Times:

“I found in my research that the biggest reason people aren’t more self-compassionate is that they are afraid they’ll become self-indulgent.

“They believe self-criticism is what keeps them in line. Most people have gotten it wrong because our culture says being hard on yourself is the way to be.”

Self-compassion is a central construct in Buddhist psychology, says Dr. Neff, who’s been a practicing Buddhist herself since 1997.

Because having a heart attack is such a profoundly traumatic and life-altering event for most survivors, we now get many opportunities to practice self-compassion daily – although in my case, I have to tell you that my experience with this foreign concept was a disaster.

During the weeks and months post-op, I was dismayed to discover that I seemed no longer physically or mentally capable of doing many simple things that I’d easily done my whole life. I was desperate to just feel “normal” again, at a time when absolutely nothing felt normal anymore. But instead of feeling compassion about ongoing complications, I mostly just felt despair and anxiety over my inexplicable failure to bounce right back.

“What’s wrong with you?” I would wail silently to that exhausted stranger’s face in the mirror.

I wish that I’d known then about Dr. Neff’s perspective on the value of self-compassion when facing challenges like a catastrophic chronic illness diagnosis. She also offers some ways to re-learn the important skill of self-compassion.

“The problem is that it’s hard to unlearn habits of a lifetime. People have to actively and consciously develop the habit of self-compassion.”

Her three key elements of self-compassion are:

“Self-compassionate people recognize that experiencing life difficulties is inevitable, so they tend to be gentle with themselves when confronted with painful experiences rather than getting angry when life falls short of set ideals.

“Frustration at not having things exactly as we want is often accompanied by an irrational but pervasive sense of isolation – as if “I” were the only person suffering.

“All humans suffer, however. The very definition of being “human” means that one is mortal, vulnerable and imperfect.  Therefore, self-compassion involves recognizing that suffering and personal inadequacy is part of the shared human experience – something that we all go through, rather than being something that happens to “me” alone.

“It also means recognizing that our personal thoughts, feelings and actions are impacted by external factors such as parenting history, culture, genetic and environmental conditions, as well as the behavior and expectations of others.

“If we had full control over our behavior, how many people would consciously choose to have anger issues, addiction issues, debilitating social anxiety, eating disorders, and so on?  Many aspects of ourselves and the circumstances of our lives are not of our choosing, but instead stem from innumerable factors (genetic and/or environmental) that we have little control over.  By recognizing our essential interdependence, therefore, life difficulties do not have to be taken so personally, but can be acknowledged with non-judgmental compassion and understanding.

“Self-compassion also requires taking a balanced approach to our negative emotions so that feelings are neither suppressed nor exaggerated.

“This equilibrated stance stems from the process of relating personal experiences to those of others who are also suffering, thus putting our own situation into a larger perspective. It also stems from the willingness to observe our negative thoughts and emotions with openness and clarity, so that they are held in mindful awareness.

“Mindfulness is a non-judgmental, receptive mind state in which one observes thoughts and feelings as they are, without trying to suppress or deny them. We cannot ignore our pain and feel compassion for it at the same time.

“At the same time, mindfulness requires that we not be “over-identified” with thoughts and feelings, so that we are caught up and swept away by negative reactivity.” 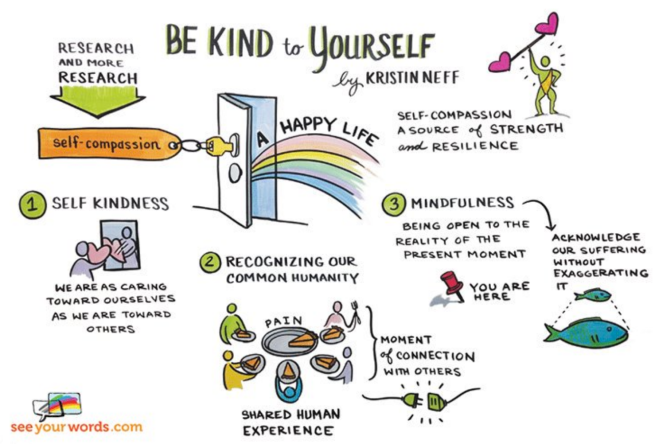 Watch Dr. Neff’s 6-minute video to learn more about your own abilities to be self-compassionate.

NOTE FROM CAROLYN:    I wrote more about self-compassion in my book, “A Woman’s Guide to Living with Heart Disease” . You can ask for it at your local library or favourite bookshop, or order it online (paperback, hardcover or e-book) at Amazon, or order it directly from Johns Hopkins University Press (and use the JHUPress code HTWN to save 30% off the list price when you order).

“God punishes bad children!” – or, why you have heart disease

Go Easy On Yourself, an interview with Dr. Neff from the New York Times

Thanks to Dr. Kristin Neff for her wisdom

NOTE FROM CAROLYN: I wrote much more about self-compassion in my book, “A Woman’s Guide to Living with Heart Disease” . You can ask for it at your local library or favourite bookshop, or order it online (paperback, hardcover or e-book) at Amazon, or order it directly from Johns Hopkins University Press (and use the code HTWN to save 20% off the list price when you order).

4 thoughts on “Are you too hard on yourself?”