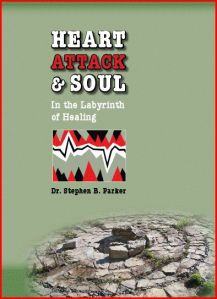 The Alaskan cardiac psychologisthas a unique perspective: he is also a heart attack survivor himself. His words will ring true for both heart patients and their families. It’s the story – both in images and words – about the journey of healing after his own 2005 heart attack. He describes how, “in desperation from depression”, he began drawing and painting as he wrestled with how to express how the heart attack had affected him.

Although, amazingly, he had no previous experience making art, his impressive drawings morphed into a blog in which he spent 40 days reviewing the paintings and writing a daily observation. The blog paintings and comments became a well-praised public art exhibit, and that has now at last become a book.

“As you take in the words and the simple yet evocative drawings, you come to appreciate what Parker has gone through. You can’t help but relate his life experiences to emotional experiences of your own.

“It is not just a recounting of experiences and struggles. It is reflective, deeply personal and peppered with humor.”

Of the short two-page chapters in the book – like ‘Betrayal Of The Body’ or ‘High Anxiety’ – one of my favourites is called ‘Emotions Of The Wounded Heart’, accompanied by his intensely colour-streaked abstract of a human heart. He outlines, for example, what he calls these “swirling emotions” experienced after surviving his heart attack:

“Relief at survival — disbelief and anger that it happened — grief for everything that has and will be lost — gratitude to those who helped — extreme vulnerability in a previously safe world — fear of what the future might bring.”

When I first read these words (on his original blog), it was not long after surviving my own heart attack. It was the first time I’d found an itemized list of the very emotions that had overwhelmed me since being discharged from hospital.

Dr. Stephen Parker’s book is unique among useful heart resources in that he incorporates his broad professional background as a Jungian psychotherapist to help inform his own emotional, mental and spiritual journey as a vulnerable heart patient. This dual personal/professional perspective is an impossibly rare feature compared to other books that focus primarily on just the physical effects of heart disease, most written by “experts” who have never had to walk the talk themselves.

I love this book! And I believe Heart Attack & Soul would make an immensely helpful gift, both for newly diagnosed heart patients and for those who love them.

5 thoughts on “‘Heart Attack & Soul’: the perfect gift for the heart attack survivor”