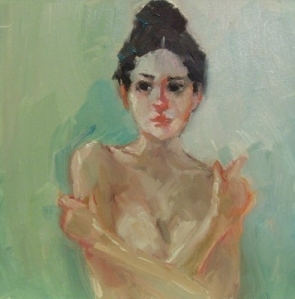 Resume As a heart attack survivor with an accordion file of ongoing complications, I’ve become a frequent flyer with my cardiologist, my longtime family physician, related specialists, the Pain Clinic, our local hospital, and in countless diagnostic labs. Many cardiac procedures involve stripping to the waist and putting on that  flimsy paper gown. In the case of a stress echocardiogram, for example, it means having the opening at the front instead of the back to allow 12 EKG leads to be attached to your bare torso during the test.

The last time I had a stress echo done, the experience was so profoundly upsetting that I not only filed a formal complaint to the departmental manager, but I created for her something I called Carolyn’s Top Ten Tips on How to Treat Your Patients.

It wasn’t the specific diagnostic procedure itself that was so upsetting that day. It was the appallingly poor social skills of the two attending technicians in the room.

For example, when I entered the echo lab, one of the two techs present sat at a corner desk. He did not look up at me when I walked in, did not say hello, did not introduce himself. Was he the tech? Was he the doc? Was he the janitor?

As I later wrote to his manager:

“It’s not so much that these two people were openly rude – but it was their insufferable lack of people skills that pushed me over the edge. No introductions, no eye contact, no consideration of how awkward this test can be, no explanation of the test procedures or even the flimsiest effort at polite conversation.

“And by the way, next time I’m ordered to strip to the waist in front of a strange man, he’d better buy me dinner first.”

It has occurred to me during this and a few needlessly stressful medical encounters like it that the physicians, nurses and technicians who seem least likely to act like they give a damn may be the very staff who themselves are struggling with job burnout.

Burnout has been widely described as emotional exhaustion. The most conscientious people-helpers appear to be most vulnerable to burnout. Researchers like Maslach, Freudenberger and others dating as far back as 1977 gave the name ‘burnout’ to the special stressors associated with social and interpersonal pressures.

Dr. Arch Hart, who coined the term ‘compassion fatigue’, says burnout may include:

Dr. Christina Maslach has described burnout as “a state of physical, emotional and mental exhaustion marked by physical depletion, chronic fatigue and negative attitudes towards work, life and other people.”

She adds the following signs that you may be struggling with burnout:

It was that last sign that should have waved a red flag (or at least a couple of EKG leads) in front of my face.

If a health care provider is feeling “cynical and negative about self, others, work and the world in general”, this person may no longer be capable of exhibiting even basic common courtesy or consideration about a patient’s potential discomfort or embarrassment during a clinical procedure.

“However, when doctors were in a negative mood, they did the opposite.”

I was already feeling anxious and worried about this last stress echocardiogram when I walked into the echo lab.

Earth to hospital and clinic staff: There is no such thing as a “routine” test for heart attack survivors.

When I was casually told to strip to the waist by that stranger in the corner, neither he nor his colleague offered me a place to change or to leave my clothing. So I slowly pulled off my sweater and bra and clutched them tightly to cover up a bit while the two techs sat in bored silence, waiting for me to hurry up. One motioned to a chair in the far corner for me to place my belongings, and tossed me a paper gown.

Both could not possibly have demonstrated less respect for modesty or dignity even if they had deliberately set out to embarrass me. Afterwards, I described my impressions to their manager:

“To them, I was merely their 1 o’clock appointment, the obstacle between them and their next coffee break, just a piece of meat on a slab – but worse, an invisible piece of meat.”

In fact, it was this odd and inappropriate behavior of both these techs that first made me think: “Something is very wrong with you people!”

Health care providers suffering from emotional burnout could easily treat other human beings the way I was treated that day. Even offering a cursory  “Hello, my name is…” apparently required too much effort of them. They simply could not care less.

I was unable to identify this at the time, but when I read Dr. Hart’s list of burnout symptoms, a number of them leaped out at me to describe my stress echo techs: depersonalization (treating yourself and others in an impersonal way), detachment (withdrawing from responsibilities), and distancing (avoidance of social and interpersonal contacts). Check. Check. And check.  See also: When Patients are Seen as “The Enemy”

The most damaging part of this encounter was not the procedure itself. I’ve had many other far more potentially embarrassing medical procedures (sigmoidoscopy, colonoscopy, CT colonography, cystoscopy, not to mention that I’ve delivered two babies the old-fashioned way) but none left me feeling as distressed as I felt during and after that stress echo.

Why?  It just happened that the health care professionals who administered those other privacy-invading procedures had been unfailingly kind, gentle, considerate, approachable, careful to explain what was happening, and solicitous of how I was doing throughout.

The good news: after receiving my complaint – tellingly, the second in the same week about the same people! – the cardiology departmental manager told me she felt quite alarmed to hear this about her employees. She not only spoke to the people involved, but then read my Top 10 Tips On How To Treat Your Patients aloud to all her staff at their next meeting.

And since publishing the list here, I’ve heard from a number of Heart Sisters readers that it’s now been posted on a number of hospital staff room bulletin boards across North America.  You can read the list here at “An Open Letter To All Hospital Staff”.

This was originally a guest column published March 26, 2011 on Dr. Joel Sherman‘s patient privacy and modesty blog – in which I was referred to by one of his readers as a “prude” who needed to “grow up”.

When patients are seen as “The Enemy”

Empathy 101: how to sound like you give a damn

Would it kill you to treat your patients with respect?

The lost art of common courtesy in medicine