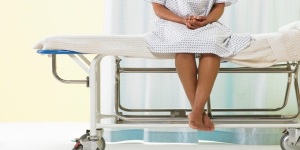 So I showed up for a scheduled medical test at the hospital the other day. It was one of those particularly distasteful tests that involve a full day’s prep at home choking down a range of hideous chemical cocktails, consumption of which is designed to induce explosive liquid diarrhea that requires staying very, very close to a toilet all day long. The procedure itself  on the following morning was right up there on the Creepy Disgusting Embarrassing Cringe Scale of medical experiences.

Hospital procedures like this feel invasive, uncomfortable, distressing, and revoltingly undignified for most patients. All the more reason that medical staff who administer such procedures need to start treating us like we’re more than just the nameless, faceless 10 o’clock patient in Bed 8, what I’ve previously described here as “the obstacle between them and their next coffee break, just a piece of meat on a slab – but worse, an invisible piece of meat.”

Call me crazy, but I might even go so far as to insist that patients deserve to be treated with common courtesy, and let’s start with the simple basics of saying something like:

(For more on the importance of introducing yourself to patients, visit #HelloMyNameIs, a U.K. campaign launched by physician-turned-terminal cancer patient Dr. Kate Granger. And also see Dr. Kate’s comment here below).*

Consider, by comparison, the young male who greeted me in the hospital’s Medical Imaging Department.

Well, perhaps “greeted” is not quite the right word.

Rather, he walked up to my gurney where I lay dressed only in a drafty hospital gown, my I.V. already poked into place in my right arm.  “So you must be Carolyn?” he said aloud, reading from my chart without actually looking up or making any eye contact whatsoever. I replied:

He actually seemed surprised that I would have the temerity to engage him like this.

But since surviving my heart attack in 2008, I have decided to stop meekly tolerating bad manners from health care providers.

My responses now range from simply stopping them in mid-sentence in order to force them to make eye contact or to introduce themselves or to explain an upcoming procedure, to complaining directly to their department heads (as I detailed in An Open Letter To All Hospital Staff).

1. My first basic rule of interpersonal health care communication: Do not under any circumstances let a man who hasn’t bothered with the simple human courtesy of introducing himself to you start sticking objects up your bum.

2. My second basic rule of interpersonal health care communication (of particular interest to female heart patients whose cardiac diagnostics/procedures  seem to require more than their fair share of above-the-waist nudity):  Next time you’re ordered to strip to the waist in front of a strange man who has not introduced himself, he’d better buy you dinner first.

Last year, I wrote about a study reported in the journal Archives of Internal Medicine that had examined patients’ preferences of exam room etiquette vs. the actual reality as captured on videotape during the study.  Researchers from Northwest University’s school of medicine interviewed patients and found that:

But when researchers videotaped new patient visits with doctors, they found that:

My own experience with medical rudeness is not uncommon, according to Dr. Lyle Fettig, who conducted a survey of patients at a teaching hospital affiliated with Yale University School of Medicine. His study included hospitalized patients as well as physicians of various levels of training (intern, resident, and attending).  Patients were interviewed on the day of hospital discharge, and the physicians were interviewed towards the end of their inpatient month.

Dr. Michael W. Kahn wrote about the need for doctors to smarten up their interpersonal skills for The New England Journal of Medicine. (1)

“Patients ideally deserve to have a compassionate doctor, but might they be satisfied with one who is simply well-behaved?

“When I hear patients complain about doctors, their criticism often has nothing to do with not feeling understood or empathized with. Instead, they object that ‘he just stared at his computer screen’ or ‘she never smiles’ or ‘I had no idea who I was talking to’.

“I believe that medical education and postgraduate training should place more emphasis on this aspect of the doctor–patient relationship — what I would call ‘etiquette-based medicine.’

“There have been many attempts to foster empathy, curiosity, and compassion in clinicians, but none that I know of to systematically teach good manners. The very notion of good manners may seem quaint or anachronistic, but it is at the heart of the mission of other service-related professions.

“The goals of a doctor differ in obviously important ways from those of a Nordstrom’s employee, but why shouldn’t the clinical encounter similarly emphasize the provision of customer satisfaction through explicit actions? “

Here, for instance, is Dr. Kahn’s staff checklist for the first meeting with a hospitalized patient:

1.  Ask permission to enter the room – then wait for an answer.

4.  Sit down. Smile if appropriate.

5.  Briefly explain your role on the team.

6.  Ask the patient how he or she is feeling.

“Such a checklist has the advantages of being clear, efficient to teach and evaluate, and easy for trainees to practice. It does not address the way the health care provider feels, only how he or she behaves; it provides guidance for trainees whose bedside skills need the most improvement.

“The list can be modified to address a variety of clinical situations: explaining an ongoing workup, delivering bad news, preparing for discharge, etc.”

NOTE FROM CAROLYN: I wrote much more about exam room etiquette in my book, “A Woman’s Guide to Living with Heart Disease” . You can ask for it at your local bookshop, or order it online (paperback, hardcover or e-book) at Amazon, or order it directly from my publisher, Johns Hopkins University Press; use their code HTWN to save 20% off the list price when you order).

What Do You Call Your Doctor?

An Open Letter To All Hospital Staff

Would It Kill You to Treat your Patients with Respect?

The medical apology: have you ever received one?

Gigi: An E.R. Doctor’s Warning to His Residents

*  Dr. Kate Granger died on July 23, 2016. The physician who told her that her cancer had spread did not introduce himself, and did not make eye contact with her. She was so disturbed by his behaviour that she launched her #HelloMyNameIs campaign to encourage all health care staff to introduce themselves to their patients. RIP, Dr. Kate.

15 thoughts on “The lost art of common courtesy in medicine”