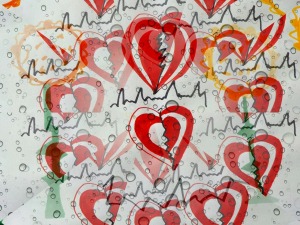 Los Angeles cardiologist Dr. Noel Bairey Merz believes that the biggest issue facing women heart patients is that as a society we have been programmed to think of heart disease as a man’s problem. During a presentation in Australia last year, she told her audience:

“The fatty build-up of plaque in a coronary artery causing a heart attack will usually rupture or ‘explode’ in men.

“But in women, it will often be a much smaller, more subtle event, caused by ‘erosion’, not explosion.

“Often their symptoms may throw doctors off track to the wrong diagnosis, and in many cases, women won’t even know they have had a heart attack until it’s too late.”   .

In an earlier TED talk, Dr. Bairey Merz described the differences between what she calls male-pattern and female pattern heart attacks:

“Hollywood heart attack. Ughhhh. Horrible chest pain. A big clot explodes in the middle of a coronary artery. Doctors can see this hugely abnormal EKG.  And they all go up to the cath lab and boom, boom, boom – get rid of the clot. That’s a male-pattern heart attack.

“Some women have those heart attacks, too, but a whole bunch of women have another kind of heart attack where plaque erodes, doesn’t completely fill the coronary artery with a big clot, symptoms are subtle, EKG findings are different – that’s a female-pattern heart attack.

“So what do you think happens to these gals? They’re often not recognized, sent home, or told: ‘I’m not sure what it was. Might have been gas!’

“So then we said: ‘We’re going to hypothesize that the fatty plaque in women is actually different, and it’s deposited differently, compared to men.”

Part of that hypothesis, she explained, starts with the common knowledge of how women and men become obese in general.

Where do men get fat? Right here in their bellies, she pointed out.

But where do women get fat? “All over! Cellulite here, cellulite there.” Dr. Bairey Merz and her colleagues at Cedars-Sinai Heart Institute observed that  the big “lumpy bumpy fatty plaque” blockage in a man having a heart attack resembles what she calls “a beer belly in his coronary artery”, unlike the plaque in women’s arteries, which she described like this:

“Plaque in a woman’s coronary artery can look very smooth, just laid down nice and tidy!

“Nobody can tell that they even have a heart problem.”

Regular Heart Sisters readers will know immediately that Dr. Bairey Merz is describing what I’ve been writing about here for five years: women presenting to Emergency and then being misdiagnosed and sent home in mid-heart attack – just as I was – because their cardiac test results were “normal”.

“Heart disease, like cancer, is not one, but several disorders. Discoveries from the WISE study suggest that many women have a form of heart disease called coronary microvascular dysfunction (MVD) or small vessel disease that is not detected by standard diagnostic procedures, and thus goes unrecognized and untreated.”

What triggers MVD is not known, but Dr. Bairey Merz suggests that high blood pressure during pregnancy, for example, might predispose some women to the condition.

(Coincidentally, I was diagnosed with pre-eclampsia during my first pregnancy – typified by spiking high blood pressure. And we now know that women with pre-eclampsia are up to five times more likely to develop heart disease compared to women who do not have pregnancy complications).  After surviving a “widowmaker heart attack” in 2008 caused by a 95% blockage in my left anterior descending coronary artery, I was subsequently diagnosed with coronary microvascular disease, too.  See also: My Love-Hate Relationship With My Little Black Box

Typically, the narrowings in these smaller blood vessels – too small to stent or bypass – are caused by the same soft, vulnerable plaque that clogs bigger vessels where most heart attacks begin, explains Dr. Bairey Merz.  This narrowing reduces the space for blood flow and makes the arteries less able to expand in response to exercise or emotional stress.

Dr. Bairey Merz believes that the best diagnostic test for detecting MVD may be something called coronary reactivity testing. This angiogram-like test lasts 60-90 minutes and allows doctors to see how very small vessels supplying the heart respond to different “challenges” from medications.

And she recently added this additional diagnostic tool to an article called “Myocardial Infarction Re-Defined“ in the American College of Cardiology’s In Touch site:

Q: Have you heard of this “explode-erode” gender difference in heart attacks?