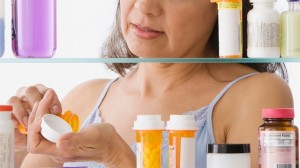 C.  you’re wondering what you can do to help prevent B from happening to you?

Warding off a first heart attack is what physicians call “primary prevention”. It’s also what respected cardiologists representing both the American Heart Association and the American College of Cardiology are now telling us can be effectively accomplished by taking one of the cholesterol-lowering drugs known as statins.

But it turns out that many other equally-respected cardiologists don’t believe that taking a powerful drug every day for the rest of your natural life for a disease you don’t even have is appropriate for primary prevention – particularly in women.

Instead, they believe that proven non-drug cardioprotective measures like regular exercise, a Mediterranean-type diet, smoking cessation, stress management, getting a good night’s sleep, maintaining a healthy weight, and other lifestyle improvements are equal to or even better than pharmaceuticals at primary prevention of heart disease.

“Statin therapy should not be approached like diet and exercise as a broadly-based solution for preventing coronary heart disease. These are lifelong medications with potential side effects.”

Also included is Kentucky electrophysiologist and blogger Dr. John Mandrola, a strong advocate for the cardioprotective benefits of regular exercise and heart-smart eating, who once wrote:

“If you don’t have heart disease, the best way to avoid getting it is so simple, so easy to understand, and so not up to your doctor.  Pills should never be the basis of preventing heart disease.”

Between these two groups of duelling cardiologists (and all of us confused patients) are a handful of academics who have waded bravely into the fray, including Martin Wells and Theodore Eisenberg at Cornell University.

In their paper published in the journal Future Cardiology(1), Wells and Eisenberg cite a number of primary prevention studies on statins:

“The cholesterol-heart attack link and the achievement of lowered cholesterol without protective effect is an important scientific puzzle.”

Last year, I wrote here about the new 284-page pro-statin cardiovascular treatment guidelines for physicians published in 2013. In a nutshell, the likely result of these significantly revised practice guidelines (as I predicted here and here) is the ultimate recommendation that, if you have a detectable pulse, you should probably be taking statins.

Statins have, in fact, become the most widely-prescribed family of pharmaceuticals in the world.

In their landmark report called Evidence for Caution: Women and Statin Use, Canadian researchers Drs. Harriet Rosenberg and Danielle Allard at Women and Health Protection reviewed the effectiveness and safety of statin medications for women.

Equally importantly, they observed that having cholesterol is now somehow thought of as a virtual disease state.

Yet we know that cholesterol performs many vital functions in the body. For example:

Rosenberg and Allard also remind us:

“There are many modifiable risk factors associated with heart disease, including smoking, diet, poverty and exposure to environmental pollutants, but cholesterol has become the most prominent and feared risk – perhaps because it can conveniently be addressed by taking a pill.”

Indeed, if you do have pre-existing cardiovascular disease, chances are that taking the statins your doctors have no doubt already prescribed for you may in fact provide “secondary prevention” (lowering an existing heart patient’s risk of having another cardiac event).

But so will regular physical exercise, as a number of studies have already clearly suggested.

“No statistically detectable differences were evident between exercise and drug interventions in the secondary prevention of coronary heart disease.”

But taking pills is very good for the pill business, as Dr. Howard Brody at the University of Texas told Bloomberg Business Week:

“The whole statin story is a classic case of good drugs pushed too far.

“The drug business is, after all, a business. Companies are supposed to boost sales and returns to shareholders.  The problem they face, though, is that many drugs are most effective in relatively small subgroups.

“With statins, these are the patients who already have heart disease.

“But that’s not a blockbuster market. So companies have every incentive to market their drugs as being essential for wider groups of people, for whom the benefits are, by definition, smaller.”

“What the shrewd drug marketing people at Pfizer and the other pharmaceutical companies did was spin it to make everyone with high cholesterol think they really need to reduce it.

“It was pseudo-science, never telling you the bottom-line truth, [which is] that statins don’t help unless you have pre-existing cardiovascular disease.”

In fact, a central component of those new 2013 guidelines is that although your doctors may have previously told you to take statins to lower your high LDL (bad) cholesterol, those arbitrary targets for cholesterol-lowering all those years are in fact unsupported by scientific evidence.

Even veteran cardiologist Dr. Noel Bairey Merz of Cedars Sinai Hospital in Los Angeles (coincidentally a co-author of the 2013 guidelines) made this revealing admission about women’s heart disease risk while responding to a New York Times piece called “Don’t Give More Patients Statins”:

“Clinical trials of LDL cholesterol-lowering generally are lacking for this risk category.”

And after being reminded that even the massive 2008 JUPITER study on the statin known as Crestor also showed there was “no treatment benefit” when women who took statins were studied as a subgroup, Dr. Merz conceded to CNN that the “evidence isn’t perfect” and that “there are no clinical trials of statin use in women alone”.

Part of this puzzle may stem from older cholesterol studies done on men – not women – in which researchers assumed that any benefits to taking statins observed in men would also likely be true for women of similar risk.

But as Wells and Eisenberg reported, there seems to be no statistically significant cardioprotective effect of statins for women:

“It is not just that there is no direct evidence of benefit for women, but extrapolation from men to women is statistically inappropriate.”

There was even more jumping to conclusions going on, according to the Future Cardiology paper. These jumps included this interpretation of results from statin studies on secondary prevention:

“Results from these secondary prevention studies were used to support statin use in primary prevention, even though the risk profiles for women in the two groups obviously differ.”

Perhaps physicians need to rethink what might seem a knee jerk practice of pulling out a prescription pad to prevent heart disease – at least until we get robust evidence of statin benefits in primary prevention – particularly among healthy women.

And traditionally, as Wells and Eisenberg remind us, the scientific burden of proof of benefit is on the proponent of the treatment.

Please remember to discuss your own health issues with your physician. Do not stop taking any prescription drugs based on what you read here or anywhere else. For excellent decision-making resources, discuss with your doctor either Mayo Clinic’s Statin Choice Decision Aid, or the Therapeutics Education Collaboration’s Cardiovascular Disease Risk/Benefit Calculator.

Q:  What have you and your doctors decided about statins?

* from my other site, The Ethical Nag: Marketing Ethics for the Easily Swayed

11 thoughts on “Women and statins: evidence-based medicine or wishful thinking?”