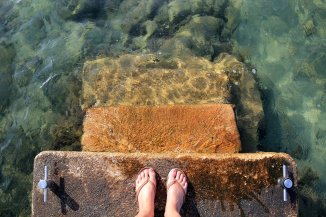 ve on an island, so we’re often dependent on the ferries that carry islanders to the mainland and back. And because this is Canada’s west coast, high winds or rough seas can very occasionally cause sudden sailing delays or outright cancellations. When this happens, we often don’t know when sailings will resume, and nobody can tell us. Uncertainty like this about what daily life will bring includes both the routinely ordinary (what’s causing this traffic jam?) and the potentially important (when will my test results come in?)  This state of uncertainty is what psychologists often call “cognitive dread”.    .

“We tend to want and need to see ourselves – and the world – as essentially solid, stable, and permanent, and through that lens of predictability we find comfort. So, when the bottom falls out, it usually creates emotional chaos that can easily morph into crisis.”

This emotional chaos can feel awful. Many of us would rather get the bad news now than become even more stressed while ruminating. I’d rather be told upfront that we’re definitely in for a four-sailing ferry wait, for example, than worry about how long that wait may or may not be.

Pain research has also demonstrated that, when faced with a possibility of pain, most people want to get it over with as soon as possible.

When U.K. researchers, for example, asked their study volunteers to choose between electric shocks of different intensity occurring at different times, most of them chose to hasten the pain, and would even accept more severe pain to avoid having to wait for it.(1)

In over 70 per cent of the tests, “participants chose to have the pain earlier, even though in half of the tests that meant a more painful stimulus.”

And this trickster of the nervous system works both ways. Taking a pain pill that you believe will work, for instance, means that your sensation of pain actually begins to decrease even before the medication has time to be absorbed into your bloodstream.

But what if you suddenly realize that you’ve run out of those trusty pain pills? Because you now believe that you cannot get the immediate help you need, and – worse! – you’re uncertain about if or when you will be able to get that help, your nervous system pays more attention to those pain signals, and you will feel more intense pain.

This is why being misdiagnosed can feel so traumatic for patients.

Not being believed, or having our symptoms dismissed or ignored, or being repeatedly told by experts that “there’s nothing wrong with you” , or feeling uncertain about what’s happening  often leaves us feeling scared or abandoned. See also: Skin in the Game: Taking Women’s Cardiac Misdiagnosis Seriously

And without an accurate diagnosis, there can be no appropriate treatment plan.

Sharon Roman experienced her first medical symptoms at age 30. She wrote in the British Medical Journal (BMJ) about hearing her own life-altering diagnosis of multiple sclerosis for the first time:

“A diagnosis can be a revelation to patients. The pieces of the puzzle finally fit to form a picture. It brings a sense of relief; they have not been imagining or exaggerating their various symptoms.

“Although it’s a short-lived relief, as other emotions begin to tumble into the now vacant space: fear, anger perhaps at having felt trivialized, and more. It may even bring a sense of closure to the vicious game of chase with an unknown ‘it.’ “

At last, they are believable.”

For those who have been misdiagnosed, an accurate diagnosis can indeed feel like a relief – because no matter how bad the news, there will almost always be some kind of plan to replace the initial uncertainty. (See also: “The Shock – and Ironic Relief – of Hearing a Serious Diagnosis“)

An interesting California study looked at another important aspect of uncertainty: whether, if given the choice, people prefer to hear good news or bad news first.(2)

Researchers found that in situations where the news about to be given was mixed (“I have good news and bad news for you…”),  almost 80 per cent of those studied preferred to receive the bad news first. One observation was that they’d end up feeling better if they got the bad news out of the way, so that their uncertainty could be minimized.

Compared to the minority who wanted to first get the good news, the bad-news-first group reported not only feeling better, but less worried in general.

It’s important for both patients and their physicians to keep in mind that feeling temporarily relieved – especially if an accurate medical diagnosis has been a long time coming – doesn’t ever minimize the eventual reality of that diagnosis. With a chronic and progressive illness like heart disease, it can mean a significant adjustment to this diagnosis, and even to a whole new way of life. (See also: The New Country Called Heart Disease)

Is there anything that we can do when we’re in a state of cognitive dread?

A study on the uncertainty of dread in the journal Science suggested that distraction can be a powerful tool to help us, because merely expecting an emotional event is an emotional event in itself.(3)  Actively drawing attention away from what we’re dreading may reduce the discomfort of the wait.

Dan Mager also offers three options for those of us trapped by an uncertain reality.

Allow yourself to feel. “You can be angry, anxious, resentful, or scared without having to act out on or suppress those emotions.”

Apply the Serenity Prayer* by identifying the areas you can control – and those you can’t.  “Becoming aware of where you do have some control or can make changes facilitates emotional balance.”

Practice patience and acceptance. “It’s the waiting in the hallway between one door opening and another closing that’s so difficult, and it takes awareness, skill, and practice to negotiate that wait.”

Q:  Have you experienced that sense of “cognitive dread” because of uncertainty?

. NOTE FROM CAROLYN:   I wrote much more about the uncertainty of waiting for a diagnosis in my book, “A Woman’s Guide to Living with Heart Disease”. You can ask for it at your local library or favourite bookshop, or order it online (paperback, hardcover or e-book) at Amazon, or order it directly from my publisher, Johns Hopkins University Press (use their code HTWN to save 20% off the list price).

Read “Let’s all be palm trees together” in facing COVID-19, a guest post by Walk With a Doc.

11 thoughts on “Cognitive dread: the painful uncertainty of waiting”