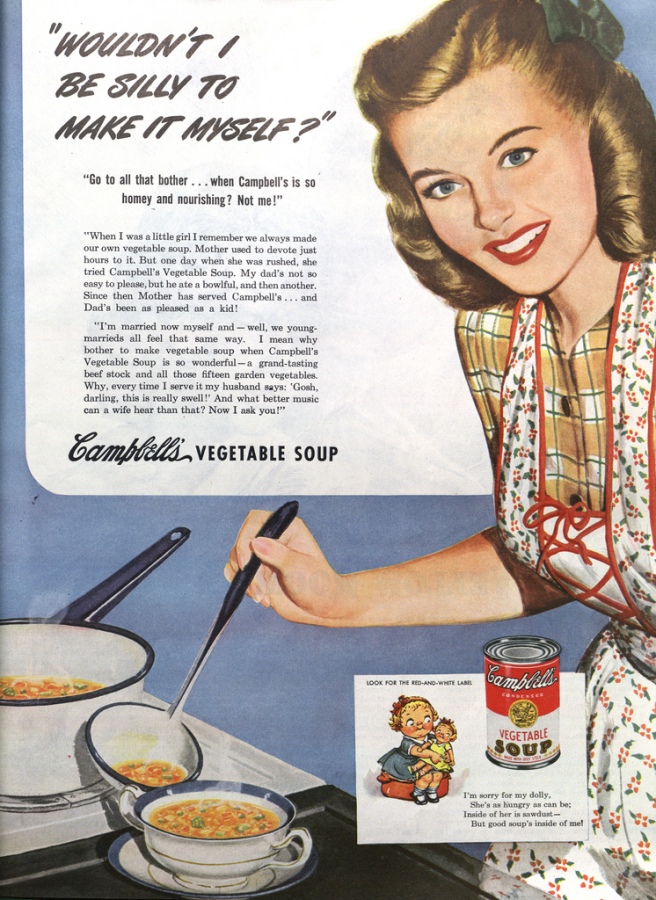 “Go to all that bother.. when Campbell’s is so homey and nourishing?  Not me!”

“When I was a little girl, I remember we always made our own vegetable soup.  Mother used to devote just hours to to it. But one day when she was rushed, she tried Campbell’s Vegetable Soup.  My dad’s not so easy to please, but he ate a bowlful, and then another.  Since then, Mother has served Campbell’s… and Dad’s been as pleased as a kid!

“I’m married now myself and — well, we young-marrieds all feel that same way.  I mean why bother to make vegetable soup when Campbell’s Vegetable Soup is so wonderful — a grand-tasting beef stock and all those 15 garden vegetables.  Why, every time I serve it, my husband says: ‘Gosh, darling, this is really swell!’  And what better music can a wife hear than that?  Now I ask you!”

After I picked myself off the floor where I’d fallen down laughing, I pondered what effect this magazine ad from the 1940s actually must have had on women who read it.  And for those concerned about heart health, the widespread marketing of highly processed, high-fat, high salt, low-fibre, mass produced industrial food was a grim development.

To address my pondering, along comes Laura Shapiro and her interesting and often very funny book called Something In The Oven that takes a nostalgic look at post-war kitchens and their transformation at the hands of corporate food giants.

As The New Yorker described this transformation according to Shapiro:

“In the fifties, the food industry barged into the North American kitchen, waving TV dinners, and destroyed home cooking. Not so fast, Shapiro says.

“As she reveals, women refused many of the new convenience foods. Fish sticks they accepted, but not ham sticks. Canned peaches, yes – canned hamburgers, no.

“The food industry hired psychologists to help them combat such resistance. Women’s magazines, fond of their advertisers, told readers how, by splashing some sherry over the canned peas, they could still make dinner look as though they had cooked it.

“Marketing and modern food science soon overcame objections, television advertising spread the gospel of efficiency, and the 1950s American kitchen and diet were transformed. Shapiro delves into this period of rapid change and comes up with absorbing stories of the era’s women like the familiar tales of the fictional Betty Crocker and cultural icon Julia Child.”

And Marion Chan, director of food and beverage consulting at the market research firm, The NPD Group explains:

“Baby boomers have developed a habit of not cooking. Cooking from scratch as we knew it 20 years ago is something that’s increasingly rare in the average household now. People call things ‘cooking’ today that would roll their grandmother in her grave — heating up a can of soup or microwaving a frozen pizza.

“Boomers aged 55+ are even eating fewer breakfasts at home, and heading out to restaurants in the morning more frequently than in any other year.  Take-out meals from casual dining restaurants over the past six years have seen double-digit growth, with NPD analysts reporting: “as the population ages, there is a greater demand for convenient food for childless households that no longer feel the need to participate in the cooking process.”

After seeing the truly terrifying documentary called Food, Inc. (which I’ll expand on here after I recuperate from its overwhelming effect on my family!), seeing this vintage canned soup ad seems like a spookily bleak forerunner of what has become the appalling reality of what we are putting into our mouths.

Find out more about Something In The Oven by Laura Shapiro.

One thought on ““Wouldn’t I be silly to make it myself?””