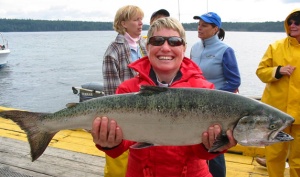 Here on the West Coast of Canada, every small town on our island seems to lay claim to the enviable title of “Salmon Fishing Capital of the World!”  We  do love our salmon. And crab. And halibut, red snapper and many other kinds of local seafood.

According to experts at Mayo Clinic, eating two servings of fish a week could actually help to reduce your risk of heart attack by as much as 30%. For adults, that serving size is 3 ounces (85 grams) or about the size of a deck of cards.

“Doctors have long recognized that the unsaturated fats in fish, called omega-3 fatty acids, appear to reduce the risk of dying of heart disease.”

Here’s why those omega-3 fatty acids in fish are so good for your heart:   Fish – particularly fatty fish like salmon, herring and to a lesser extent tuna – contain omega-3 fatty acids, a type of unsaturated fatty acid that’s thought to reduce inflammation throughout the body. Inflammation in the body can damage your blood vessels and lead to heart disease.

Are there any fish to avoid eating?   Both tilapia and catfish may not be as heart-healthy because they contain higher levels of unhealthy fatty acids. A Wake Forest University study published in July 2008 found, for example, that lower amounts of omega-3 and the higher ratios of omega-6 compounds found in farmed tilapia raise questions of the health benefits of consuming this fish. Always ask your grocer where and how this fish was caught.  Avoid buying tilapia farmed in China or Taiwan.

“Any fish can be unhealthy depending on how it’s prepared. For example, broiling or baking fish is a healthier option than is deep-frying.

“Some researchers are also concerned about eating fish produced on fish farms as opposed to wild-caught fish. Critics believe that antibiotics, pesticides and other chemicals used in raising farmed fish may have harmful effects to people who eat the fish.”

Does mercury in fish outweigh the health benefits?  Mercury is one of the main types of toxins found in some fish, followed by dioxins and polychlorinated biphenyls (PCBs). The amount of toxins depends on the type of fish and where it’s caught. According to Mayo Clinic:

“Mercury occurs naturally in small amounts in the environment. But industrial pollution can produce mercury that accumulates in lakes, rivers and oceans, which turns up in the food that fish eat. When fish eat this food, mercury can build up in the bodies of the fish.

“Large fish that are higher in the food chain — such as shark, tilefish, swordfish and king mackerel — tend to have higher levels of mercury than do smaller fish. Larger fish eat the smaller fish, gaining higher concentrations of the toxin. The longer a fish lives, the larger it grows and the more mercury it can collect.”

Canada’s Heart and Stroke Foundation reminds us that all fish contains a small amount of mercury, which is acceptable for most people.

“However, some varieties can be a concern for pregnant and breastfeeding women and young children under the age of 12 because of their high mercury levels. They include tuna (Ahi, canned albacore and yellowfin), orange roughy, swordfish and seabass. It is suggested to either avoid eating these varieties or consume less than three servings per month.

Some fish with moderate levels of mercury include tuna (canned chunk light), snapper, halibut, cod and lobster. Try to consume these less than six servings per month.

“Opt instead for fish with low levels of mercury such as salmon, haddock, trout, herring, scallop and crab.”

Mayo Clinic experts still maintain that in general, the overall risk of getting too much mercury or other contaminants from fish is generally outweighed by the health benefits that omega-3 fatty acids have.

Here’s one of my easiest and most delicious healthy recipes:

4 thoughts on “Do you know why you should eat fish twice a week?”