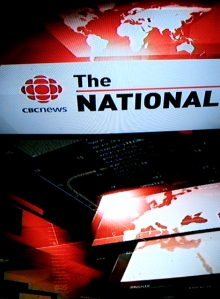 It all started when I was contacted by Melanie Glanz, a television producer with CBC News from Toronto. She was working on a report about hospital food, she explained. Would I be willing to be interviewed for this news feature?

Hospital food?  I assured Melanie that I was not a dietitian or nutritionist or hospital administrator. Not an expert on hospital food at all – rather, more like just a mere victim.  But she persisted. She had read my blog article called Hospital Food: The Best Reason to Keep Your Heart Healthy and Avoid Hospitalization. And she told me she really needed a patient’s perspective on such an important topic.

I agreed, albeit a tad reluctantly. What was there to say, after all, about hospital food that hasn’t already been whined about by generations of patients?  “Hospital food is bad!”  After that, I didn’t think I’d have much else to say.

But we booked a date a few days later for a Canadian Broadcasting Corporation camera crew to come to my home here on the West Coast to film the interview. The CBC website ran a promo article about its big upcoming hospital food exposé.

The next morning, another request came from Toronto:  it would make for more interesting visuals, Melanie explained, if I could be actually doing something while they filmed me – like preparing something healthy for lunch.

The day that CBC was to arrive at the door, the countdown began.

I decided to scrub my kitchen to within an inch of its life.  I washed the floors, scrubbed the counters, polished the handles on all the cupboards and drawers, emptied the recycling, and shined up all the appliances until they sparkled.  I de-cluttered, arranged vases of fresh flowers, and even cleared all of our family photos off the fridge door, just like they tell you to do on those HGTV home-staging shows.

For my cooking demo, I decided upon vegetable soup, which I figured was both easy and heart-healthy.  I had very cleverly pre-sautéed my chopped onions the night before our morning interview (no weepy red eyes for me on national television!) and whipped up a veggie broth ready to heat up as soon as the camera started rolling.

I also sharpened up my best Henckels stainless steel knife from Germany for the occasion. I figured it would look far better on camera than my actual day-to-day standby – an old 1971 bread knife that I normally use for all chopping chores (yes, I know, I know, it’s supposed to be for bread only – but really, am I the only person around here who prefers a nice all-purpose bread knife in the kitchen?)

When the CBC camera crew finally rang the doorbell, I surveyed my kitchen proudly on my way to the front door.  It all looked fabulously gorgeous!

Everything was going pretty well, I must say, until Mark the camera guy set up his microphone, tripod, camera and lights – and the television interview actually started.

Suddenly, I didn’t seem to have anything even remotely intelligent to say on the subject of hospital food.  For example:

CBC: “How was the hospital food when you were admitted as a heart attack patient?”

CBC:  “What suggestions would you make for improving hospital food?”

We limped along like this, interrupted only by my occasional whimpers of:  “I’m really not an expert on this . . .”

And honestly, in my own defense, some of the questions Mark was firing at me were a lot harder than I’d anticipated.

He wanted to know my opinion, for example, about serving Jell-O to hospital patients.

Jell-O? What do I know about Jell-O?!  I like the cherry kind that my mother used to make when I was a kid, that’s all I know.

If only Mark had asked me about women’s heart disease. I could rattle on about emerging cardiac research and diagnostic tools and gender differences and facts and stats for days on end.

I became aware right about then that I seemed to be sweating, quite a lot actually, and that I’d already chewed off all my lip gloss.

Eventually, Mark ran out of questions, the lapel microphone was removed and, mercifully, we moved over to shoot the background footage of me in action prepping the soup. This would be edited in later to accompany the voice-over of CBC journalist Melanie Nagy for the iconic nightly news program called The National.

My first step, Mark told me, was to get my veggies ready for chopping.  He followed right behind me with his big camera as I went over to open the fridge door.

♥  Consumer Warning: if the Canadian Broadcasting Corporation ever calls you wanting to interview you for a national news story, clean out your fridge before you say yes.

You see, dear heart sisters, I tend to have one of those bulging-at-the-seams refrigerators that my family and friends regularly make fun of. My collection of salsa, chutneys, pickles, olives, hummus and assorted condiments alone takes up two entire shelves. Who knows what’s lurking in the nether regions of that big shiny appliance? Every so often, I do empty the fridge, scrub every surface, toss out the slimy compost that used to be cucumbers or grapes – but today, alas, was not that day.

Luckily, Mark was cooperative (and perhaps a tad frightened by my outburst); he backed away slowly and suggested: “Okay. Let’s wait until you are ready to start chopping.”

I pulled out my lovely orange carrot, specially pre-selected the night before as the best of the bunch and suitable for showing off to the rest of Canada. I placed it neatly on my disinfected lime green recycled enviro-plastic chopping board and, at Mark’s cue, started to chop.

But something suddenly seemed to be very wrong with my hand-eye coordination. Although I was trying desperately to smoooooothly slice those carrot coins like those celebrity chefs do on TV, my Henckels knife just would not cooperate. I wasn’t used to chopping with such a sharp knife! I hacked and whacked and attacked that carrot while it just lay there fighting me with all of its might. I felt a bit like a special needs cook wielding a pole axe.

Meanwhile, the CBC camera kept rolling.  When he couldn’t stand watching me lurch through the chopping attempts any longer, Mark directed me to walk towards the soup pot nearby, and then to very slowly slide the ugly lumps of carrot into the broth, by now bubbling away on the stove.  I carefully followed his instructions.

“What else do you have?” Mark asked me.

“Great!” Certainly celery would be more photogenic than that carrot?

Thinking ahead, I had also cleverly pre-peeled two sticks of perfectly measured and evenly sized celery earlier that morning. Don’t want any of those unsightly celery strings on national television, do we?

I think I regained a bit of confidence with the celery, managing to produce fairly even slices with the surprising ease of Rachael Ray (only without her $18 million paycheque).  Then, a repeat walk over to the steaming soup pot, s-l-o-w-l-y sliding the chopped celery into the soup, just like a real pro.

Now Mark wanted me to start stirring the soup, again very s-l-o-w-l-y so he could move in for a dramatic close-up.  I tried to fish up the chunky orange carrot bits from the bottom as much as possible to distract viewers’ attention from a soup that looked alarmingly beige.

“What else do you have?” Mark asked again. This part was clearly more enjoyable for him than the painful Q&A we had just survived.

What else?!  All I’d planned for (and pre-measured, pre-peeled, and pre-scrubbed) was one onion, one carrot and two stalks of celery.  This wasn’t like making real soup – my soup was just a TV prop. There was nothing else!

I also feared that his question might require me to open that fridge door again.

I opened the fridge a tiny crack to block Mark’s camera view, slid my hand in and felt around until I could feel a chunk of cabbage. Thank goodness, it wasn’t the brown slimy kind, but a relatively fresh new head.

This is where I discovered my chopping chops. I was a complete whiz at slicing the cabbage into exquisite traceries of white and palest green. Who knew cabbage was this beautiful? Delicate fragments flicked about my kitchen like confetti as my Henckels flew into action.

By then, I had the drill down pat.  Slice. Walk to stove. Lift pot lid.  Slide veggies in.  S-l-o-w-l-y.  Stir up those carrots from the bottom. And also – most importantly! – try to keep my head up during all this to minimize Mark’s side shots of my double chins.

A full hour had passed and by now I was utterly exhausted.  All that chopping and stirring and,  of course, my scintillating on-air commentary had wiped me out.

I waved goodbye to the nice CBC crew as camera equipment and lights and tripods were finally packed up and removed from the apartment.  I closed the front door and breathed a sharp sigh of relief.

And that’s when I decided to clean out the fridge . . . 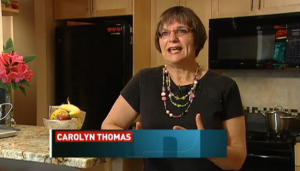 My National News Debut Update:   The hospital food news feature aired on CBC television across Canada on The National on July 2, 2012.  It all went by in  a blur.  All I remember is my important message: “Hospital food is bad!”

P.S. I’m also grateful that my Jello-O response ended up on the cutting room floor . . .

16 thoughts on “My debut on the national news”