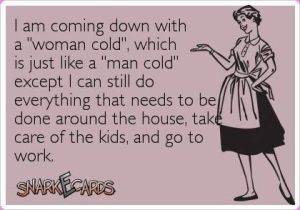 It turns out that the hilarious British spoof on the horrors of the Man-Cold might be more true than we ever imagined. The reality here is that when a husband gets sick, his wife is naturally expected to become his doting caregiver, but when a wife gets sick, she may feel distinctly on her own.

A study presented last month at the annual meeting of the Population Association of America actually reported that the risk of divorce among married couples rises when the wife – but not the husband — becomes a heart patient.

Study author Dr. Amelia Karraker, a researcher at the University of Michigan Institute for Social Research, examined how the onset of four serious illnesses – cancer, heart disease, lung disease and stroke – affected the marriages of couples over a 20-year period. Dr. Karraker explained:

“We found that women are doubly vulnerable to marital dissolution in the face of heart disease.

Dr. Karraker suggests that gender norms and social expectations about caregiving may make it more difficult for men to provide care to spouses diagnosed with cardiovascular disease.

A previous 2009 study on partner abandonment found similar results. A married woman diagnosed with a serious disease is six times more likely to be divorced or separated than a man with a similar diagnosis.

Researchers point to a few possible explanations for the disparity. For one, being a caregiver is not a traditional role for men, says Dr. Marc Chamberlain of the Seattle Cancer Care Alliance:

“The majority of husbands take excellent care of their partners, but men on the whole tend to be less comfortable doing so.”

And don’t be thinking that this is necessarily the case of a callous, heartless hubby taking off when his poor wife becomes ill. In fact, although Dr. Karraker and her research team did not specifically set out to track who initiated divorce during their 2014 study, she explained:

“It’s important to keep in mind that in most cases, it’s the women who do so.

“So it could be that when women become ill and their husbands are not doing a very good job caring for them, they would rather that he just go, and they rely on friends and family who will take care of them.”

As I wrote here, a shaky marriage can be even more susceptible when a serious illness strikes. A 58-year old woman I interviewed explained how this impacted her own decision to stay with her husband:

“I had my sudden, out-of-the-blue heart attack on Mother’s Day 2011. My husband denied I was sick. I wanted to go to the Emergency Care Center near our home. Hubs said: ‘Take a pill and lie down, it’s just anxiety!’  He argued with me all the way to hospital.  Twelve hours later,  I woke up in the Intensive Care Unit after a triple bypass and two stents implanted from having three Spontaneous Coronary Artery Dissections. The cardiologist said if I hadn’t arrived just when I did, I would have died.

“But nothing changed in how my hubs treated me. All week in the hospital, my hubs kept telling me I didn’t have a heart attack. On discharge day, I asked the doctor in front of him if indeed I’d had a heart attack, and the doctor looked at me with a look of incredulity and said ‘Of course you did!’ Hubs had nothing to say.

“He never went to any follow-up appointments with me. Two months after the heart attack, he ranted at me in front of my best friend about how lazy I was and how he’d had to do everything around the house for the last eight weeks and he was exhausted!

“PS: It is now over a year later and I live by myself. I choose life on my terms now. I don’t need to take care of a cold, unfeeling man.  And now I feel so much lighter! If they can’t be empathetic when we’re healthy (and we knew this), then they won’t be there for us when we’re sick.”

This assumption that friends and family will step up to the plate in the absence of a caregiving spouse may, surprisingly, be a correct one.

U.K. researchers studied hundreds of patients with chronic illness and their unpaid caregivers in northwest England.(1) The ages of study participants ranged from 20 to 93 years, but the average was 65. About 20% of those studied had diabetes, 40% had coronary heart disease, and 41% had both conditions.  On average, participants lived with 2-3 chronic conditions. Researchers reported their findings in the journal Public Library of Science One:

“While spouses and close family members make the highest caregiving contributions to a patient with chronic illness, there is evidence of inputs from a wide range of relationships.

This makes perfect sense, doesn’t it?  If we have a very sick friend who lives on her own, we’re far more likely to offer caregiving support to that person (bringing over  meals, driving her to appointments, helping her with basic household tasks like laundry or grocery shopping) than we might be if she lived with a spouse.  That’s because we would assume that her husband will be preparing her meals and pitching in with daily tasks while she’s ill.

But, sadly, we may be making those assumptions even if hubby is not doing any of those things!

The illness-related work that other people do to support patients they know is considerable. In the U.K. study, for example, researchers identified these three types of chronic illness work that needs to be done:

Researchers reminded us that, although many physicians tend to look at chronic disease management as the sole responsibility of the patient – often focused on individually-centred outcomes of behaviour changes – support from other people within the patient’s social network is crucially important to their ability to function at home. For example:

“This chronic disease management perspective has masked the power of connections and being linked into networks which provide access to the support that people value and engage with as part of everyday life.”

“We know that for many patients living with chronic illness, the support they receive from family members, friends, neighbours and others in their social networks can extend well beyond an individual’s capacity for coping or managing the day-to-day reality of being a chronically ill person.

“Our analysis has helped to elaborate the crucial elements of illness management that lie outside the confines of both the individual and traditional health service.”

Most of us think that such support comes only from immediate family members or the very closest of friends, but these social networks can actually be surprisingly wide.

The U.K. study coded eight sources of patient support during a serious illness based on their relationship to the patient:

When researchers looked at this broad list of potential support resources and which group offered which type of illness-related work to patients, one result stood out.  Generally, close friends and family members greatly exceeded all other relationship types with respect to offering emotional work. Friends and colleagues made the second largest contribution to emotional work, followed by other family in third place, with spouses/partners ranked fourth.

“The contributions made by different kinds of members of a patient’s social network are varied. Our findings indicate that emotional work is the type of work that is most dispersed and open to contributions from a wider set of relationships.”

Many patients have told me about being amazed during their recuperation by who actually does step up to help them.

Sometimes, it’s the people they most expected to help out who don’t, but often those they may not have felt closest to surprise them by immediately offering support in many unique ways.

Here’s an example: after I was discharged from hospital following my own heart attack in May 2008 (and you gardeners already know that May is prime summer planting season!),  one of my co-workers guessed that I’d have a hard time lugging flats of plants, heavy bags of potting soil, and buckets of water to plant summer flowers out in my balcony planters. An avid gardener herself, she offered to take over this big seasonal job for me. I then got to spend a lovely sunny morning relaxing in my big red chair while observing her happily working and planting away outside on the balcony. And best of all, during the following months recuperating at home, I got to look out through a wall of windows at her gorgeous balcony display of colourful annuals every day all summer long.

Yet this surprisingly generous gift of time and labour had come from a colleague I was only casually acquainted with at that time. Thank you, Kathleen!  I will never forget that kindness. ♡

Q: Have you been either delighted or disappointed by who supported you (or not) while living with serious illness?

10 thoughts on “Who will take care of you at home if you’re seriously ill?”