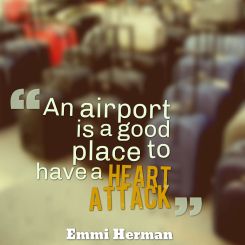 Emmi S. Herman is the mother of three millennials and grandmother of two perfect grandchildren. As the grandmother of one perfect child (our adorable Everly Rose), I can relate. I can especially relate to her because, like Emmi, I too survived what doctors call the “widow maker” heart attack (a misnomer that really needs fixing given how many women I know who have survived it. Physicians don’t, for example, call this serious cardiac event the “widower” maker, do they?)  Emmi is a children’s book author with expertise in early literacy skills. When not writing copy at her day job or at work on a memoir about her sister, she is in her car somewhere between New York and New Jersey. Here’s how she describes the six important lessons she learned about having a heart attack.

Few life experiences described as “unremarkable” merit high approval. A doctor’s appointment that concludes with “unremarkable” in your medical chart is one. A seamless, multi-stop transatlantic flight is another.

I had just landed at John F. Kennedy International Airport after one such unremarkable flight, my husband of 36 years beside me. I felt rested and energized, and mused that travel like this could happen more if we become better long-term planners. He nodded a perfunctory “uh-huh” without looking up from a Baldacci thriller, speed-reading the last few pages before the airplane engine stopped.   Little did I know, I was about to have a heart attack–the kind medical experts term “the widow maker.”

1)  Time is critical in a heart attack. Medical treatment within 90 minutes of symptoms means a greater chance for full recovery, according to the American Heart Association.

We breezed through the automated passport control area, scanned our passports and took selfies. Then I raced to claim our luggage. Baggage claim triggers my disquiet. Long ago, someone took my luggage off a carousel and abandoned it in a remote area of the airport. I found it eventually, intact, but my pesky cortisol and adrenaline hormones spike whenever I’m at baggage claim.

My husband does not share my baggage claim angst. He headed to the restroom.

At baggage carousel 6, I circled around to the chute opening and waited. Like a bird of prey, I was poised and ready to lunge at the first sight of our luggage on the conveyor belt. A baggage handler plucked a few unclaimed bags orbiting in perpetuity from an earlier flight.

In the distant crowd, I spotted my husband and gave him a spirited wave. As the baggage chute began to spit luggage I felt a sudden jolt of “indigestion” in the middle of my chest. It slowly intensified and radiated from shoulder to shoulder.

2)  My symptoms were severe and classic like the so-called man’s Hollywood heart attack. But women, especially, may experience more subtle signs that include pain in the back, neck, jaw, or belly; nausea; or breaking out in a cold sweat.

I bent forward in an effort to relieve the pressure, but when that didn’t help, I crouched on the floor. Now eye level with the conveyor belt, I spotted my luggage, its unmistakable chartreuse-colored ribbon entwined in the handle. With knees pressed to my chest in an effort to mitigate the pain, I glared at my husband and pointed hastily to our bags as they passed by. He scrambled to retrieve them as a small crowd—the curious and the helpful—gathered.

3)  It sounds crazy but an airport is a good place to have a heart attack. Public places are equipped to respond to a medical emergency, and many different responders are present to assist.

A young neurologist from the flight leaned in and told me to stay still. He took my pulse and summoned a customer care attendant for an Automated External Defibrillator and an aspirin. My reliable husband carries three items at all times: tissues for weddings, a Band-Aid for paper cuts, and baby aspirin. He handed me the aspirin. By now my breathing was shallow but I was hazily aware of the responders, more embarrassed by all the attention and less about being stripped above my waist for the AED leads. I felt relief when the device announced “No shock necessary.”

The Port Authority police brought oxygen and a stretcher. I was whisked away through the back of the airport to a waiting ambulance, where a skilled team of medics performed an EKG, prepped an IV, and arranged for transport to the nearest hospital.

My husband implored the team to take me to a hospital where my doctors are affiliated. It was nearby but not the nearest one to the airport. I was stable so the medics got clearance to go to our requested hospital.

4)  Ask for the best possible hospital match for your medical treatment. Cardiac care is among the top revenue-generating specialties for an acute care hospital stay. A transfer to a second hospital later may cost time and money.

Initial blood tests showed a probable myocardial infarction. I was completely bewildered. I have no family history of heart attack, I do not have high cholesterol, diabetes, high blood pressure, nor do I smoke. I lead a fairly active lifestyle and eat healthily. Maybe I wrestle with stress (who doesn’t?) but at a normal height to weight ratio, I was simply not the picture of coronary artery disease.

5)  Only 1 in 5 American women believe that heart disease is her greatest health threat but it is the No. 1 killer of women— more deadly than all forms of cancer combined.

My Saturday night plan to go home, unpack, and do laundry left me with a wistful longing for the banal as I lay in the emergency room. The new plan was an IV cocktail of nitroglycerin and other meds to keep my blood vessels open and treat chest pain. “We’ll go from there,” I was vaguely told. It was hospital code for “I was stable; no need to mobilize an interventional cardiologist team on a Saturday night.”

First thing Monday morning, I was given a local anesthetic with a mild sedative for a coronary angiogram, a test that would look at the arteries near my heart. Within minutes, the doctor and his team threaded a thin catheter from an artery in my right groin to my heart. Then they injected a dye to make my arteries visible to an X-ray. Almost immediately they saw the blockage in my heart’s left anterior descending artery, one of three main coronary arteries. The team inserted a specially designed balloon catheter with a tiny mesh stent to permanently expand the narrowed area.

The procedure was over in less than one hour. I remained in the hospital overnight and was discharged with instructions. Turns out my “fairly active lifestyle” lacked a routine of daily exercise, something I have in my power to improve. Risk factors not in my control, such as vulnerable plaque, could be diminished with medicine therapy. I asked when I could return to work. “Tomorrow,” the doctor said. That was the only advice I didn’t take. Instead, I pampered myself at home a few extra days, took calls from family and friends—and did laundry.

6)  Everyone knows someone who has had a heart attack. It strikes fear in most people. To soften the stigma that surrounds a heart attack diagnosis get informed about coronary artery disease, get a regular check-up, and examine your lifestyle habits.

At my one-month follow-up, I had an echocardiogram to rule out muscle damage. The whooshing sounds of the Doppler sounded ominous, but I didn’t share my fears with the technician. I got dressed and I waited for the doctor. He came in grinning and said my heart muscle is performing at 100% with no damage. Since the heart attack, I mentioned experiencing minor aches, a sharp twinge in the back of my knee, and lower back pain. He observed, listened and jotted down notes. Then he speculated it was more likely musculoskeletal than heart-related.

As we parted, I glanced at my chart to see what he wrote and one word jumped out: “unremarkable”.  I can live with that.

This article originally appeared on ThirdAGE.

Q: What lesson did you learn during your own cardiac event?

How does it really feel to have a heart attack? Women survivors answer that question

How to communicate your heart symptoms to your doctor

Words matter when we describe our heart attack symptoms

How having a wife shortens time to heart attack care

Too embarrassed to call 911 during a heart attack?

Why we ignore serious symptoms