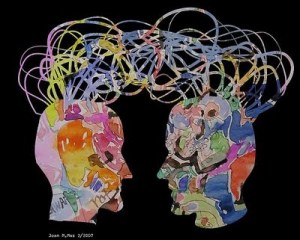 Here’s a news flash from the Prepared Patient forum of the Center For Advancing Health: your doctor is not a mind reader. And how you describe your symptoms can be just as important as what you describe. Physicians – and experienced heart patients – say you must be as detailed and descriptive as possible. For example:

“This is difficult for me to share with you but I need your help.”

Prepared Patients also reminds us of the importance of understanding two-way communication with your physician.

“Doctors want to hear how you feel, not what you think your diagnosis is.

“Doctors are very specific with terminology, and what you mean could be completely different than what a doctor understands the term to mean.”

I would argue that the exception to this advice is when you are experiencing symptoms that feel like heart attack. In this case, call 911 and say loud and clear to anybody who will listen:

“I THINK I’M HAVING A HEART ATTACK!”

Dr. Catherine Kreatsoulas was a Fulbright Scholar at Harvard University when I interviewed her after she had presented her research at the Canadian Cardiovascular Congress in Vancouver. (1)  Her studies was particularly appropriate to this topic.

I was surprised by her explanation on how some women describe their chest pain during a heart attack(2), as she told me:

“What we found fascinating in that study is that women would use a host of descriptive language to describe their heart attack symptoms, whereas men’s symptom vocabulary was generally more succinct.

“I cannot count the number of times I observed a physician leaning over a female heart patient prior to going for an angiogram, while asking: ‘So tell me about your chest pain’, and the woman very quick to respond:

“Well, I don’t really have chest pain. I have a discomfort, it’s more like pressing. I wouldn’t call it chest pain, I would describe it more as a bad ache.”

“And much to my amazement, I would observe the physician/resident record in the patient’s notes, ‘No CP’ – meaning no chest pain!

“We have no way of accurately estimating just how many patient charts have documented ‘No CP’ – when perhaps a more descriptive term for ‘chest pain’ expressed was used by the patient.”

This observation made sense to me, as I have frequently heard female heart attack survivors describe their own chest symptoms as “pressure, heaviness, fullness, tightness, aching, burning”  – rather than with the word “pain”. See also: How Does it Really Feel to Have a Heart Attack? Women Survivors Answer That Question

If there is actually such a person working in medicine, it means we have a lot more work to do to help enlighten them before they misdiagnose us and send us home.

And if a symptom anywhere in the chest area is worrisome enough to propel a woman to seek emergency medical care, let’s not split hairs if it doesn’t look exactly like this:

Pictures like this in the media are, in my opinion, downright dangerous for women experiencing cardiac symptoms. They continue to perpetuate the misguided notion that THIS is what a heart attack always looks like – which would be a profoundly false notion.

Read the rest of the Prepared Patients essay called Talking About Symptoms With Your Health Care Team. Or for six detailed pointers on good communication at your next doctor’s visit (e.g. “Don’t Leave Until You Understand What To Do Next”) check the University of Minnesota’s Center for Spirituality & Healing.

NOTE FROM CAROLYN:  I wrote much more about doctor-patient communication in my book, “A Woman’s Guide to Living with Heart Disease” (Johns Hopkins University, November 2017).