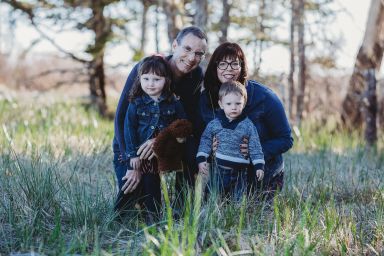 Nicole, her husband Victor, and children Renee and William

Nicole Nickerson always knew that she had a significant history of heart disease in her family: her mother had a heart attack at age 30 (due to a congenital heart defect that had been missed at birth), and her father had quadruple bypass surgery at age 40 (likely due to stress and smoking). But it was only after her 25-year old sister died of a heart attack six years ago that Nicole’s heart was checked, too.

In the ninth of our occasional Heart Sisters series called Dear Carolyn, Nicole’s letter reminds us of an under-reported and shocking reality: young women with serious heart disease:        .

“On January 9, 2014, I heard the devastating news that my 25-year old sister Ashley had just passed away unexpectedly of a heart attack.

“We would later find out that most of her main coronary arteries had significant blockages. The only warning symptom she’d mentioned was fatigue, but – like me – she did shift work as a Continuing Care Assistant in Fishermen’s Memorial Hospital in the small town of Lunenburg, Nova Scotia. The work is hard, and most of us feel fatigued, especially after night shifts.

“After my sister’s death, I saw a cardiologist and was given the all clear. But my lifestyle alone should have been a red flag:  I smoked, did very little exercise, had a stressful job – plus I’d gone through the family trauma of losing my sister.

“Barely one month after passing a treadmill stress test, I experienced severe chest pain. An Emergency Department nurse noted that my blood pressure was high, but all of my cardiac tests were “normal”. Even before my cardiac enzyme blood test results were back, however, the Emergency doctor handed me a prescription for acid reflux drugs, saying it was “impossible” to be having a heart attack because I’d recently passed my stress test, and I was only 31 years old.

“For the next two days, I paced the floor and ate bottles of Tums. Finally, a family friend (a retired Emergency nurse) took one look at me and said, “Get in the car!”

“At the hospital, I was diagnosed with a heart attack, and had a stent implanted.  Not even a year since my sister had died, and now this! Life as I had known it was gone. All I wanted was to go home. Every day, I pleaded to be let out. I think I was in shock, to be honest.

“I came home, where after a month of trying to keep it all together, I started smoking again. I never did finish my cardiac rehabilitation classes.

“Three months later, I was able to go back to work at Fishermen’s Memorial Hospital. And that’s also when I met my future husband, Victor, who is a pharmacist there. He made it his mission to make me healthy. He was successful, and less than nine months later we were married and expecting our first child! My pregnancy and childbirth experience went so well that my cardiologist gave us her blessing to have a second baby. We wasted no time: on Renee’s first birthday, we found out we were expecting William.

“But this time, there were complications from early on. I developed gestational diabetes, and my baby wasn’t gaining enough weight. I was followed very closely by professionals at the Izaak Walton Killam (IWK) Health Centre in Halifax.

“On January 9, 2018 (yes, the 4th anniversary of my sister’s death!) something felt wrong. Not exactly like my first heart attack, but wrong. I called my husband at work and asked him to come home early. While a sudden snowstorm raged outside, I fed my daughter Renee her supper.

“Our local hospital’s Emergency department had only one physician and two nurses on duty that evening when I arrived. I told them, “Something isn’t right”.  They had to send my cardiac enzyme blood sample by taxi to South Shore Regional Hospital, 20 minutes away; the test results were inconclusive. Although paramedics at the hospital were ready to transport me to the regional hospital, South Shore refused me as a patient because I was too ‘complicated’, and the larger  Halifax Infirmary hospital refused to take me until they knew for sure that I was having a cardiac event.

“I listened while the nurse and doctor begged for someone to take me. My husband and I felt so helpless. Then, just before the second troponin test would come back elevated, they thought I was going into labour!  So South Shore Regional had to take me, because the LifeFlight helicopter to Halifax couldn’t land at our small hospital.

“And on the anniversary of my sister’s death, my husband had to tell my parents in person about the frightening events that were unfolding around their daughter.

“The Lifeflight helicopter flew me to Halifax. The care I received at the Halifax Infirmary was exceptional. I stayed there six days until they saw a window of opportunity to deliver our baby.

“I was sent to the nearby 1,200-bed IWK to deliver. I have never been so scared in my life!  Nobody knew what to expect. But the next morning, little William was delivered successfully by Caesarean section. I got to spend a couple of hours with him before I was taken back to the CCU (the intensive care unit for heart patients).  My husband stayed with William who, after a couple of hours, would end up in the NICU (the neonatal intensive care unit) because his sats dropped, and he required a feeding tube for a short time. He was going between the NICU and CCU, and we were an hour and a half from home in the village of Middle Lahave where our little 19-month old Renee was staying with my parents.

“The day after William was born, a female cardiologist arranged for my second trip to the cath lab, and the day after a second stent was implanted, I was transferred to be with my new little son. I will never forget how determined I was to walk down the hallway, down the elevator, then into the NICU to see my son. The IWK nurses there were incredible!

“But nobody ever thought that maybe we needed some counseling after all we had been through – especially my husband, Victor.

“After eight days, baby William was able to come home with us. We now had a newborn preemie and a 19-month old toddler to look after, all while I was recovering from a C-section, heart attack and another stent. I look back and think: how did we manage?!!!???  But we did. I was fortunate to have my parents living next door, and Victor arranged to take three months off work to be home with us.

“This time, I did everything right. I finished cardiac rehab, completely changed my life, and I also got involved with women’s heart health advocacy work.

“After my cardiac rehab, my nurse practitioner suggested that I go to Halifax and meet with a cardiologist named Dr. Sharon Mulvagh, a professor at Dalhousie University’s Faculty of Medicine.

“Turns out they were looking for a patient to be the ‘face’ of rural heart disease. Dr. Mulvagh put me in touch with people at Heart and Stroke and the Ottawa Heart Institute. That’s how I got started in advocacy, which has served me well. In a way, it is healing. I felt I could help more people like me if I just told my story.

“I do not want to think my sister’s death was in vain, and I honestly believe that there is a purpose to everything I have been through.”

Thank you, Nicole, for sharing your compelling story. Three things struck me while reading it:

Q:  Have you had personal experience as a heart patient whose care was impacted by your young age, or a misdiagnosis, or because you live in a rural area?

NOTE FROM CAROLYN:  I wrote more about women who are told they’re too young/too female to be having a heart attack in my book, A Woman’s Guide to Living with Heart Disease. You can ask for it at your favourite bookshop, or order it online (paperback, hardcover or e-book) at Amazon, or order it directly from my publisher, Johns Hopkins University Press (use their code HTWN to save 20% off the list price).

– What kind of heart attacks do young women have?

– How implicit bias in medicine hurts women and minorities

– “You’re young, healthy, thin – and nothing’s wrong with your heart”

2 thoughts on “Dear Carolyn: “I went into labour during my heart attack””