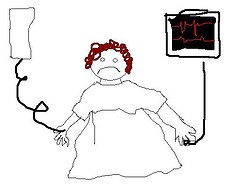 After a particularly bizarre experience undergoing a treadmill stress echocardiogram at your hospital recently, I decided to do something that I have never done before.  I called the Cardiology Department manager to file a report about her staff.  (Incidentally, a recent opinion survey of international travellers found that Canadians were #1 in only one category:  “Least likely to complain when things go wrong” – so you can appreciate that lodging an official complaint is a fairly Big Deal here!)

In my friendliest PR voice, I explained to the manager how distressing the appointment had been for me because of the behaviour of the two cardiac technicians in the room.

For example, when I entered the echocardiography lab, one of the two men in the room sat at a corner desk. He did not look up at me when I walked in, did not say hello, did not introduce himself. Was he the tech? Was he the doc? Was he the janitor? Who knows?

It’s not so much that he and his equally disinterested colleague were openly rude. It was their insufferable lack of people skills that pushed me right over the edge:

To them, I was merely the 1 o’clock appointment, the obstacle between them and their next coffee break, just a piece of meat on a slab – but worse, an invisible piece of meat.

The department manager was very receptive to my phone call, particularly since mine was her second staff complaint in less than a week.

She followed up immediately with the two techs, returned my calls promptly, and even solicited my input about how patient care in her cardiac department might be further improved.

To this end, I offered her the following tips – and if you substitute Cardiology-Speak for Emergency, Gynecology, Oncology, Radiology, Renal, Day Surgery, or the hospital department where you work every day, I suspect these tips may be universally useful. (And by the way, I learned later from friends who work at this hospital that copies of my “list” ended up posted on bulletin boards in staff rooms throughout the building).

Carolyn’s Top 10 Tips on How to Treat Your Patients

1.       Acknowledge the existence of arriving patients by saying something like:  “Hello.  How are you? My name is ____ and I’ll be doing your ___ procedure today.”  (For more on the importance of introducing yourself to patients, visit #HelloMyNameIs, a U.K. campaign launched by physician-turned-terminally ill cancer patient Dr. Kate Granger. And read Dr. Kate’s comment in response to my blog post, The Lost Art of Common Courtesy in Medicine).*

2.       Make eye contact when you are speaking to another human being.

3.       Just because you do these same procedures day in and day out routinely, do not make assumptions that patients know anything at all about the procedure that’s about to be done to them.

4.       These tests/procedures have been ordered because a cardiac event has already happened, is happening, or might happen in the very near future.  This is extremely serious for most patients.  There is no such thing as a routine cardiac test or procedure, especially once you’ve had a heart attack.  Patients can feel nervous, apprehensive, embarrassed, intimidated, vulnerable, distressed or frightened just thinking that there might be something (else) wrong with their hearts.

5.       Say: “Today’s test/procedure will start with ____, and then we’ll do ____, and then finish up with _____.”  (This was my first stress echo, for example, but I knew about this test only because during my first trip to Mayo Clinic, the staff at their Cardiovascular Diagnostic Center toured us through the echocardiography labs and explained the stress echo procedure in detail).  But even for patients who already know, it’s just common courtesy to review the basics for them.

6.       Explain everything that is about to happen before you touch a patient’s body.

7.       Then ask your patient: “Do you have any questions about today’s procedure?” before beginning.

8.       Stripping to the waist is not a big deal to most men, but it is a very big deal to women – especially with men sitting in the same room (who have not bothered to introduce themselves!) And by the way, next time I’m ordered to strip to the waist in front of a strange man who hasn’t even introduced himself, he’d better buy me dinner first.

9.       Instead, immediately offer your patients a separate or curtained-off area to remove their clothing, a clean, folded hospital gown, and a surface to put their clothing on when ready, so they’re not standing there – as I had to do in front of those echo techs – half naked in a big room, clutching sweater, purse and underwear in front of two strange men, and wondering what to do next. And by the way, why do I even have to be telling educated, intelligent people this in the first place?

10.   For helpful hints about how to treat patients with respect and politeness even in the most awkwardly embarrassing clinical setting, just ask your colleagues who do sigmoidoscopies/colonoscopies to give you some pointers.  These people are generally amazing – unfailingly considerate, kind and understanding, all qualities that go a long way to reduce patient discomfort.

*  Dr. Kate Granger died on July 23, 2016 at the age of 31.  The oncologist who told her that her cancer had spread did not introduce himself, and did not make eye contact with her, and immediately “fled the room” after he spoke.  She was so disturbed by this experience that she launched her #HelloMyNameIs global campaign to encourage all healthcare staff to introduce themselves to their patients.  RIP, Dr. Kate.

NOTE FROM CAROLYN:  I wrote more about the importance of common courtesy in medicine in my book, “A Woman’s Guide to Living with Heart Disease” (Johns Hopkins University Press). You can ask for this book at your local bookshop, or order it online (paperback, hardcover or e-book) at Amazon  – or order it directly from Johns Hopkins University Press (use their code HTWN to save 30% off the list price when you order).

A perfectly ordinary workday. Unless you’re the patient…

Would it kill you to treat your patients with respect?

The lost art of common courtesy in medicine