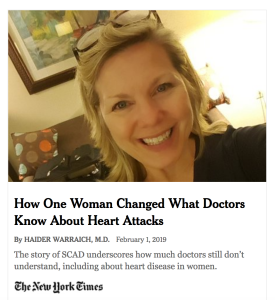 I was happy to see Katherine Leon featured in The New York Times recently. Katherine, like me, is a graduate of the WomenHeart Science & Leadership patient advocacy training at Mayo Clinic. She told the Times of undergoing emergency coronary bypass surgery at age 38, several days after her severe cardiac symptoms had been dismissed by doctors who told her, “There’s nothing wrong with you.”

She isn’t alone. Many, many studies have shown that female heart patients are significantly more likely to be under-diagnosed – and worse, often under-treated even when appropriately diagnosed – compared to our male counterparts. This is especially true for women with her condition (Spontaneous Coronary Artery Dissection, or SCAD) that was once considered to be a rare disease.

Dr. Sharonne Hayes is also featured in the NYT piece; she’s a respected Mayo Clinic cardiologist, longtime SCAD researcher and founder of the Mayo Women’s Heart Clinic. (You can read their story here).

But almost as soon as the Times piece was published online, I was gobsmacked to see some of the reader comments coming in – especially comments from people like these:     .

◊ Chris (New Jersey): “I work in an emergency room. No one’s symptoms are trivialized because of their gender. That is absolutely ridiculous.”

◊ KSK (Maine): “I am an Emergency physician. I am aware of bias in medicine against certain groups and I strive to avoid it in my own practice, but I feel articles like this confuse bias with diseases that are made difficult to diagnosis based on their rarity and/or unusual symptoms. Also worth noting is danger of over-testing, especially invasive testing. It’s a difficult problem for medicine, but I am not sure how much of a role gender bias plays.”

◊ John Wesley (Baltimore, MD): “This is OLD NEWS. 2003 was more than just 15 years ago, it was a generation ago in terms of having access to troponin testing , sophisticated heart scans, ultrasound at the bedside, and widespread certification and training in emergency medicine.  Heart attacks in 40-year old postpartum women simply don’t commonly get ‘written off’ by sexist, uncaring doctors. I think it IS important to alert female patients that they can have heart disease at a young age, and we do need to fund more gender and age specific studies in medicine, but if you have symptoms like this woman had and you go to Emergency in 2019, you will get the care and diagnosis you need. It has nothing to do with medical school curriculum, physician ‘wokeness’ or mysogyny.”

◊ James Strickland (Wilson, NC):  “This is an inflammatory article that has no basis for declaring there is gender bias. SCAD also is even rarer in men but does occur. If the diagnosis is missed on a man, can one claim gender bias? I think not.”  . CAROLYN’S NOTE: Strickland’s comment could not be left alone, as these three readers quickly demonstrated: 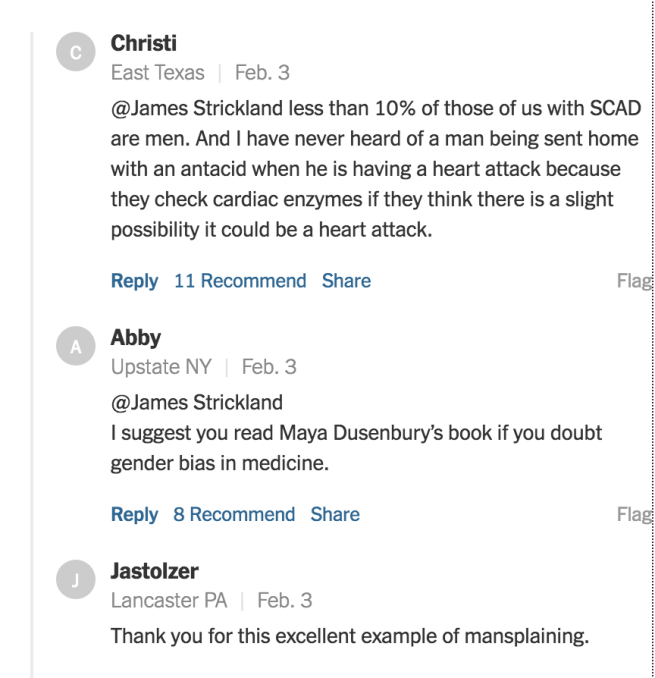 Dr. Hayes might have been as dismayed as I felt by those gender-bias deniers – especially those who identify themselves as physicians (and apparently the kind who believe some variation of “If I don’t know about it, it does not exist!”)

When I objected on Twitter to these hostile reactions,  she tweeted back:

♥
And for people like John Wesley who continue to insist that the misdiagnosis that happened to Katherine Leon in 2003 could not happen in modern times, consider the more recent experiences from these NYT readers suggesting that, yes, indeed, it can and it does:
.

“I had a SCAD in 2017. The ER doc told me he would be concerned with my symptoms if I was a male. He basically wrote me off. I even have a family history of heart issues. An hour later, I had a full-blown heart attack in the ER and was rushed to the cath lab. The surgeon knew instantly what to look for, and I received 3 stents. I can attest to the bias with women’s heart issues. It occurs on a regular basis. And we aren’t that rare. There are thousands of us with SCAD, and no confirmed cause.”

.“I sat in the ER for over 3 hours having a heart attack before the troponin results came back. And it took them another 2.5 years and another heart cath before they decided that it hadn’t just been an unusual type of clot but had actually been a SCAD (in 2014 and 2017 respectively). They still have so much to learn.”

.
◊ Audrey (Chicago):
.
“SCAD is not rare. I was a perfectly healthy 52-year old experienced physician, also not familiar with SCAD, when I experienced Sudden Cardiac Arrest. I survived thanks to my 15-year old son and paramedics with an AED (Automatic External Defibrillator). The initial team of doctors, unfamiliar with SCAD, attributed my troponin level (over 100x normal) to damage from the CPR. They overlooked a second MI (heart attack) which occurred in the ICU on the same night. They didn’t see the dissection on the angiogram, which was later confirmed by two other teams of cardiologists familiar with SCAD.  Sometimes doctors don’t see things if they aren’t looking for them.”

Cardiologist Dr. Sharonne Hayes reinforced that last reader comment from physician/SCAD survivor Audrey on whether SCAD is actually “rare” at all.

Here’s how Dr. Hayes responded to this question from another reader who asked if SCAD is really as rare as we believe, given “so many personal stories of SCAD in the comments that perhaps it isn’t so rare? Where do the numbers on how rare it is come from?”

Personally, I was heartened to read, despite the knee jerk defensiveness of some physicians listed here in response to this article, that there were a number of supportive comments from other docs like these:

“I will never forget the patient I admitted to the ICU with acute respiratory failure and acute congestive heart failure in the setting of an acute MI (heart attack). After she was stabilized, I looked over her medical records and saw she had been in the emergency room 5 days prior to coming in to my service in extremis. Her chief complaint 5 days earlier: ‘I’m having pain in my neck like when I had my heart attack.’  Treatment: No EKG, no labs, but a prescription for Valium. It is sometimes down right criminal. Hysterical woman.”

◊ Hey Nineteen (Chicago):  “I was treated horribly in the ER at one of America’s ‘best hospitals’ and I’m a doctor; they knew I was a doctor and I trained at that same hospital! Then, responding to their request that I review my experience, I wrote a scathing review of their substandard, disinterested care and received… nothing, not a single reply. Unless you’re a major donor, a department chair, on the board, suffer a malpractice-level outcome or can prove a racially-biased disparity in treatment, no one will care about your complaint.   A 30- or 40-something white lady’s laments about not being heard will not be heard either. ERs are evaluated on the rapidity of their response, not the correctness of their response. Maybe if staff stepped away from their computers for a moment and spent a fraction of the time they spend documenting service actually delivering service, we’d have better outcomes across the board in medicine.”

According to The SCAD Alliance (a non-profit organization “committed to improving the lives of SCAD patients and their families through education, advocacy, research and support”):

“The inner lining of the coronary artery splits and allows blood to seep into the adjacent layer, forming a blockage or continues to tear, creating a flap of tissue that blocks blood flow in the artery. It strikes without warning, traumatizing survivors. The cause of SCAD is currently unknown. Most doctors are unsure how to treat it.”

Q:  What was your own response to the NYT SCAD article – and to the comments?

♥ “All the SCAD ladies, put your hands up!“ (from The Wall Street Journal’s feature on how SCAD patients Laura Haywood-Cory and Katherine Leon succeeded in convincing Mayo Clinic cardiologist Dr. Sharonne Hayes to undertake SCAD research

♥  Watch this 5-minute video of cardiologist Dr. Sharonne Hayes explaining more on this exciting research, plus this 3-minute video from Mayo Clinic explaining SCAD and how survivors Laura and Katherine helped to kick-start this research on the diagnosis they shared.

♥ SCAD Research is a non-profit fundraising organization, started by Bob Alico, whose wife Judy died from SCAD. When Bob asked the cardiologist what had caused the SCAD that so quickly took Judy’s life, the doctor said he would probably never know the cause because little was understood about SCAD. In the midst of his grief, Bob decided something needed to be done to find answers. He learned that Dr. Sharonne Hayes had started researching SCAD at Mayo Clinic, and also that finding enough funding for this research was critical. In 2011, SCAD Research was established to help fund promising studies; over $800,000 has been raised so far.

♥ SCAD Ladies Stand Up: Stories of Patient Empowerment, the special report from Inspire.com and the WomenHeart online support community. It features a  number of interesting first-person accounts from SCAD survivors, plus an introduction written by cardiologist Dr. Sharonne Hayes (plus even a link to a Heart Sisters article listed on the report’s resource page!)

♥  Canadian women diagnosed with Spontaneous Coronary Artery Dissection (SCAD) are being recruited for a Canadian study based in seven cities nationwide, led by cardiologist Dr. Jaqueline Saw in Vancouver. Ask your cardiologist about participating in the Canadian SCAD Study.

♥ When your artery tears

♥  How implicit bias in medicine hurts women and minorities

♥ A zebra among horses

♥ Be your own hero during a heart attack

14 thoughts on “Is SCAD rare? Or just rarely diagnosed correctly?”